The Master and Margarita : an inspiration for " Sympathy for the Devil" ? 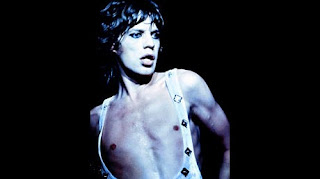 Sympathy for the Devil" is a song by The Rolling Stones which first appeared as the opening track on the band's 1968 album Beggars Banquet.
"Sympathy for the Devil" was written by singer Mick Jagger and guitarist Keith Richards, though the song was largely a Jagger composition. In a 1995 interview with Rolling Stone, Jagger said, "I think that was taken from an old idea of Baudelaire's, I think, but I could be wrong. Sometimes when I look at my Baudelaire books, I can't see it in there. But it was an idea I got from French writing. And I just took a couple of lines and expanded on it. I wrote it as sort of like a Bob Dylan song". In actuality at certain points the lyrics bear a striking resemblance to Mikhail Bulgakov's novel The Master and Margarita .

Claude Ligny, gave the first french translation of the Master and Margarita in 1968 in an edition of Robert Laffont


The working title of the song was "The Devil Is My Name", and it is sung by Jagger as a first-person narrative from the point of view of Lucifer:

Please allow me to introduce myself, I'm a man of wealth and taste;

These opening lines reflect Jagger's direct inspiration by The Master and Margarita, with the book opening with the similar "'Please excuse me,' he said, speaking correctly, but with a foreign accent, 'for presuming to speak to you without an introduction.'" More references to the book are made in

I was round when Jesus Christ had his moment of doubt and pain/ Made damn sure that Pilate washed his hands and sealed his fate;

, as this Bible passage is mentioned in the first chapters of "The Master and Margarita"
Backed by an intensifying rock arrangement, the narrator, with chilling narcissistic relish, recounts his exploits over the course of human history and warns the listener: "If you meet me, have some courtesy, have some sympathy, and some taste; use all your well-learned politesse, or I'll lay your soul to waste." Jagger stated in the Rolling Stone interview: "...it's a very long historical figure -- the figures of evil and figures of good -- so it is a tremendously long trail he's made as personified in this piece."
At the time of the release of Beggars Banquet the Rolling Stones had already raised some hackles for sexually forward lyrics such as "Let's Spend the Night Together" [5] and for allegedly dabbling in Satanism (their previous album, while containing no direct Satanic references, had been titled Their Satanic Majesties Request), and "Sympathy" brought these concerns to the fore, provoking media rumours and fears among some religious groups that The Rolling Stones were devil-worshippers and a corrupting influence on youth.The lyrics' focus, however, is on atrocities in the history of mankind, including European wars of religion ("I watched with glee while your kings and queens fought for ten decades for the Gods they made"), the violence of the Russian Revolution of 1917 and the 1918 massacre of the Romanov family ("I stuck around St. Petersburg when I saw it was a time for a change, killed the Tsar and his ministers - Anastasia screamed in vain") and World War II ("I rode a tank, held a general's rank when the Blitzkrieg raged and the bodies stank").
The lyrics also refer to the assassinations of John and Robert Kennedy. The recording sessions for the track were in progress when the latter was killed, and the words were changed from "Who killed Kennedy?" to "who killed the Kennedys?" These lyrics are also a bit of word play on one of the most famous passages by philosopher Friedrich Nietzsche in his book The Gay Science where, in section 125, entitled "The Madman" he writes:
"The insane man jumped into their midst and transfixed them with his glances. 'Where is God gone?' he called out. 'I mean to tell you! We have killed him, -- you and I!'"The song may have been spared further controversy when the first single from the album, "Street Fighting Man", became even more controversial in view of the race riots and student protests occurring in many cities in the U.S