The Life and Opinion of Tomcat Murr by E.T.A. Hoffman. 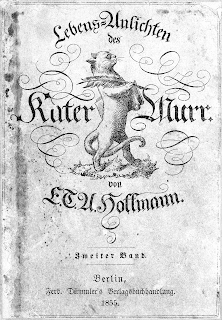 Once in a while one stumbles on a book that is so brilliant that one cannot understand that it went unnoticed to the day you read the first chapter.
I have experienced this lately with E.T.A. Hoffman masterpiece “The Life and Opinion of Tomcat Murr”, which a friend advised and the reading of which has intellectually excited me as few works have done before.

“Nothing quite prepares us for The Life and Opinions of the Tomcat Murr” states Jeremy Adler, professor of German at King's College London, in his introduction to the Penguin edition of Hoffman’s masterpiece translated and annotated by Anthea Bell.

Indeed, after each chapter, one is left enthralled, not only by the stories but also by the humour, the sheer intelligence and the astonishing modernism of it all. Although written 200 years ago, Hoffman has no problem at all reaching the readers of the 21th century.

Reading “The Life and Opinion of Tomcat Murr” effectively creates a firework of brainwaves which dart in all directions: literary references and associations, classical references and history, music and fashion, there is romance, there are hints to educational theories, there are practical jokes, there is magic, there is Freudian psychology “avant” Freud, there is gothic horror “avant” Poe there is Magic realism and structural experiments long before Calvino, Vargas Llosa or Marquez had their run at it.

A look at the author’s biography, born in 1776 in the city of Konigsberg gives us some clues to understand the deeper meanings of his “chef d’oeuvre”. Hoffman was thrown into life, not unlike the kitten he describes, neglected by his parents and raised by a puritanical Uncle. This bad start in life did not hinder Hoffman becoming a universal artist. He grew not only into a successful writer and a sharp caricaturist but also into an acclaimed musician.

In “the Life and Opinion of the Tomcat Murr”, his last and unfinished work, Hoffmann wants to tell us several stories at the same time and he wants the readers to experience it as such. He finds a clever and funny trick to do that. The book presents itself as a printing error, where the autobiography of Murr, a likeable and erudite Tomcat, has been polluted with pages of the biography of the Composer Jonathan Kreisler.

The reader has in fact a grossly misprinted book in his hands!

Back in 1800, this structural trick was revolutionary! So much so, that Hoffmann as a kind editor has to warn and explain it to his readers in a foreword and put signposts within the pages.

M. cont. is the actual biography of Murr and WP. stands for wastepaper, a respect-less code for the parts of the biography of Kreisler.

This double structure hints immediately to one of Hoffman’s preferred literary themes: the double or the “Doppelganger”

We know that the subject of the double fascinated Hoffmann. At least 10 of his stories are treating this subject in its different variants. It was a literary theme that reached its peak during the German Romantic period and in which most of the artists dabbled.
The literary theme of the “Double” finds his origin at the moment people start wondering about them-selves. Who am I? Why am I acting like this?

Hoffman, in his last book, develops this theme into a syntheses of al his understandings, experiences and analysis’s gained in his life. Two double images who describe the relation of the artist and the world.

Tomcat Murr’s biography is a first image of Hoffman and must be read as a Portrait of the Artist as a young Cat. Did his own cat inspire Hoffman? Had he been observing his pet while silently smoking his pipe and wondered what went on behind these clever eyes? Did he envy the freedom of his cat? Wandering at night through the streets and not to have to account for its acts? Arrogantly advertising his superiority and not being punished socially for it? Was the straightjacket of social life too tight? Perhaps.
The Kapellmeister Kreisler, the musician, is another Hoffman. If Murr represents the asocial aspect of the Artist, then Kreisler represents the social Artist. He lives, not unlike a pet in close symbiosis to an aristocratic family. They pay him for music lessons and he finds a public for his creations.

But Kreisler too has a double in the pages. The insane painter Ettlinger, is again another possible aspect of Hoffman, It represents that part of him he encounters in his delusions and nightmares.

And so it goes on, mirror reflecting mirror, double meeting double, reflections casting back reflections until we have the most complex, multi dimensional and complete portrait of the great Artist.

Easily bridging two centuries, Hoffman offers us his kaleidoscopic portrait for our own reflections.
Confronted with this legacy, we too are forced to ask ourselves who we are and what we stand for. Questions we will need to ponder over our whole life.

I have not the ambition to proselytise but for once I’ll make an exception.Friends, don’t let this gem unread. Grab Hoffman’s book and enjoy!