The Master and Margarita : An exercise in interpretation 1 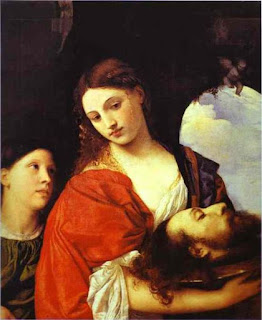 This painting by Titian, from 1515 hanging in the Ria Doria Pamphilj in Rome, does not represent Salome with the Head of John the Baptist.
It represents a scene from Mikhail Bulgakov's masterpiece "The master and Margarita".
The severed head is that of Mikhail Alexandrovich Berlioz, chairman of the Moscow literary association. The beautiful girl holding it on a plate is a tramdriver, member of the Russian Union of Communist Youth. The younger woman on the left is Anushka from Sadovaya street who has inadvertently broken a bottle of sunflower oil which caused the announced beheading of the man.
Why do I think so ?
The way Satan predicts the death of the chairman gives a hint : "Your head will be cut off..... by a Russian woman, a Komsomol girl. Google Woman + beheading and there it is : the myth of Salome and Saint John the Baptist. Another tip is that in a first draft of the book, this incident takes place on the 24 June, which is the name day of the same Saint.
The author wants to punish his character Berlioz for not believing in Jesus Christ. And he wants to do it in style. After dead by crucification, the beheading is after all the most visual way of killing someone in the Christian symbolism. It will resound several times again through the pages of the book.
But it is not Berlioz who represents Saint John the Baptist, it is naive and unspoiled Ivan Nikolaevich Ponyrev, better known as Ivan Homeless. Altough Ivan is a carricature of Efim Pridvorov, the atheist poet who so scandilized Bulgakov, he still gets a respectfull role in the book. His nickname "Homeless" might indicate that he is still in search of an identity, a higher purpose in life. He does not yet believe in God or the devil, but he does not believe in the system either.
In the Chase, that strange fast moving chapter, three important things happen. First with the scene of the huge tomcat walking on it's hindlegs and trying to jump on a tram, absurdity settles in to the novel on a larger scale. The Muscovites witnessing the scene, unlike Ivan, do not find it strange that the cat can pay for a tramticket. Ivan experiences "normality" now in a different way than the other citizens.

Then comes the baptism scene with the full submersion in the cold river. Baptism is the mystery that transforms the old sinful man into the new, pure man; the old life, the sins, any mistakes made are gone and a clean slate is given. Through baptism one is united to the Body of Christ by becoming a member of the Eastern Orthodox Church.
A new man comes out the water and that is why the author gives him new clothes. The old Western Ivan with the cowboy shirt, white trousers and black sneakers changes into a reborn one dressed in the Russian uniform of the peasant.

The third experience in his transformation takes place in the communal apartment he enters in his search for the devil. The apartment is deserted save a little girl and a naked woman washing herself in a tub. The naked woman reacts like an adulterer. Is she Herodiade, who is denounced by saint John? Is the little girl her daughter Salome? It is not clear. Ivan goes away, taking with him two props that will clearly identify him as a religious outcast: a candle and an icon.

Now, Ivan is ready to enter the temple of the literary establishment: Griboedov. Look at him! His burning candle in his hand and his icon attached to his blouse. Barefoot and in his tattered white Tolstoi shirt, looking like a ghost, acting like a drunk. He is now John the Baptist, the last prophet, the announcer of the Messiah. "Listen to me everyone! He has appeared. Catch him immediately; otherwise he'll do untold harm! "But it is not the Messiah he announces but his counterpart: the Devil.