It was Anthony Burgess’s misfortune to be shortlisted at the same time as William Golding for the Booker Prize 1980. The jury preferred “Rites of Passage” over “Earthly Powers” but the final decision was a close one. Maybe it was Burgess’s refusal to attend the ceremony if the organization would not confirm his victory in advance, which tilted the balance in Golding’s favor. But even if the judges would have indulged in the writer’s prank, practically it would not have been possible, for Golding’s name fell only thirty minutes before the ceremony… So the story goes.

Still, for Burgess, the Booker would have been just one more confirmation of his immense talent. And his book Earthly Powers, still ranks today on most “best of” - lists, “best 25” – lists or any other literary canon. A few weeks ago, I picked up an old unread copy, lost somewhere between my TBR stacks. The glue which held the pages together had deteriorated and each page came lose as I was reading it, each page of it, all 678 pages.

The story, which Burgess kick-starts with the now famous “outrageously provocative” first sentence is a fictional biography of an acclaimed British writer, named Kenneth Toomey, who looks back with the unreliable memory of his eighty-one years, at the twentieth century in which he has played his small part but of which he has certainly witnessed more than many others.

Intrigued by this fictional biography, I have also read his two part “true biography”: ”Little Wilson and Big God” and “You’ve had your time”. 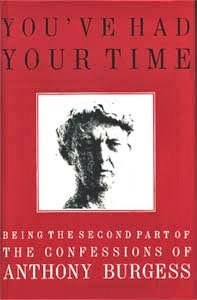 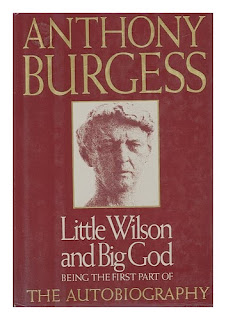 The overlapping of the “true” and the fictional is interesting on its own account.