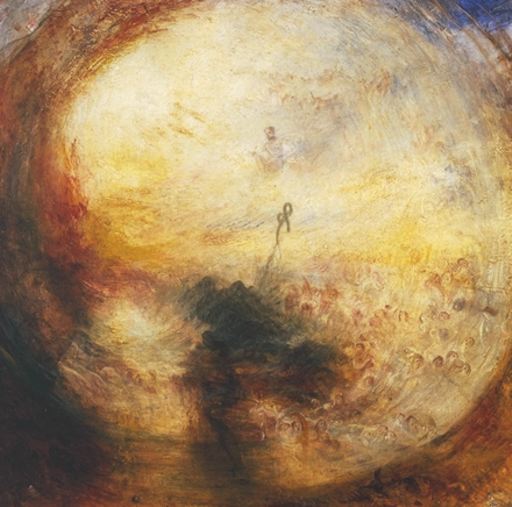 In the poor light of an early morning in July 1967, William Golding’s yacht “Tenacious”, a cutter-rigged traditional wooden barge, crossing the English Channel, had a collision with the Japanese freighter Heian Maru. As the Maru disappeared in the morning fog, the “Tenacious” was left alone, sinking.

“They clouted our stern, holed us, and disappeared into the mist. Our wooden stern was stove in and we started sinking very quickly”

On the yacht, besides Golding, were his wife and daughter and some close friends. During the next 45 minutes, the bewildered crew considered the ludicrous options to escape their fate: a plastic sound-horn, a hand held emergency torch, a small inflatable raft.

For Golding, an ex Navy officer, well aware of the odds, these 45 minutes must have been truly traumatic.

But the crew of the Maru had luckily been aware of the collision and were able to steer back to the place of the contact, with the help of the radar that had initially failed to spot the yacht and the British pilot who was still on board. Golding and his loved one’s where saved " in extremis".

The “Tenacious” unfortunately was lost

Golding never did get another boat, or ever sailed again far from shore. The “Tenace” disaster had a lasting effect on the writer’s confidence and self-esteem.

That this experience kept haunting Golding is proven by that threatening background atmosphere, that rumble sense of menace, that pervades Golding’s novel “Close Quarters”: Drama at sea does not come necessarily with high waves and strong winds; sometimes the horror engulfs the luckless sailor on a calm sea and windless day.

Close Quarters, written in 1987, is the middle part of the Sea-trilogy “To the Ends of the Earth”. It follows “Rites of Passage”( reviewed earlier) and precedes “Fire down Below”. Nevertheless, there is a remarkable style breach in comparaison with the previous book. “Rites of Passage” was an impressive dark allegory and this follow-up is completely different. It is lighter in tone, there seem to be no allegoric intentions, it is no mirror of what a reader called: “the horrific testimony to humankind’s propensity to evil”.

But ofcourse it remains an excellent piece of fiction writing.

The still unnamed old warship, after being blown aback in a nasty gale by the negligence of the officer on watch ( Lieutenant Deverel), has got one blow to many and seems to be damaged in her very structure and appears to be sinking slowly. The Foremast is damaged and has to be brought down. This considerably slows down the old ship.

Why then, if the conditions on board remain critical, this lighter style?

According to Golding’s biographer, the major reason lies in the fact that “Close Quarters” was written in one of the happiest moments of Golding’s life. The writer was by now enjoying his Noble –prize status and he moved to his new home, a splendid Georgian Manor named Tullimaar. Golding was also enjoying a happy time with his wife, when they were finally able to make their dream voyage through Canada.

“Close Quarters” is a real "middle book", unlike “Rites of Passage” it is not a self-contained novel and to fully enjoy it, one needs some knowledge of its predecessor. The reader has to understand the characters presented in the first book, to fully appreciate what happens in the second.

Like the first part, the book is presented as a journal, albeit this time a personal one, well structured and organized. Our friend, young Edmund Talbot, still that mixture of charm and unconscious arrogance, starts the narrative by telling how he bumped his head ( twice ) quiet badly and in my opinion after that he becomes an unreliable narrator, “par excellence”.

Unreliable , because the things Talbot narrates are never what they seem. The threatening French Man O’war turns out to be the British HMS Alcyone, announcing the end of war, Napoleon’s abdication and his exile to Elba. When Talbot , during an investigation in the very bowels of the ship, clearly hears surging water inside the boat, nobody can confirm if the sounds come from within the sinking ship. His servant Wheeler, who was lost overboard, is back! A new officer appears on board, another vanishes. Thickets of weeds, engulf the old ship, and seem to turn into a sea-monster slowly dragging the boat to a complete halt.

The biggest trick of course is the two boats meeting each other in the middle of the ocean and the sea being so calm (very unlikely), that the two becalmed ships are attached to each other to celebrate the victory over the French in a Victorian ball organized on deck! Talbot gets the opportunity to dance with a young woman, a passenger of the Alcyon, beautiful Miss Chumley, with whom he has fallen in love, head over heels. No doubt, the reader will enjoy this infatuation, as much as young Talbot does!

Besides the Love affair of our friend Talbot, Golding still brings up the same issues of privilege, class, hope, he tackled in the first book. The initiation, like the voyage, is far from being over...

Golding’s summer read, while composing “Close Quarters” was N.A.M. Rodger’s “ the Wooden World: An Anatomy of the Georgian Navy. Golding had accepted to review it for a newspaper.

Rodger defended the Navy against the popular assumption that it’s motive forces were in Churchill’s words “ Rum, Sodomy and the lash” Golding, as an ex Naval officer agreed that flogging captains were fiction, and that alcohol consumption was never so as too endanger the boat and crew, but he did not agree with Rodgers that sodomy did not take place. Golding argued: “There is vast oral evidence in naval speech, custom and lore that where men are cooped up in a wooden world for weeks and months at a time, unnatural acts take the place of natural ones”. Golding’s affirmation ( without judgment) brings to mind the reaction of Bruce Chatwin’s parents, when confronted with the possible cause of theirs son’s HIV infection. Bruce’s mother is shocked, but his father, a Navy officer with a tough reputation, strangely accepts his son’s homosexuality more easily than his wife.

Talbot might be in love with Miss Chumley, but others might be ( never is anything sure in this book ) in love with Edmund ! “Close Quarters” therefore in treating the issue of homosexuality as an undercurrent theme, follows in this the mood set by “Rites of Passage” which ended with Reverend Colley’s “dying of shame”. Colley’s unhappy ghost still lingers between the pages. His hutch for instance remains empty as the superstitious crewmembers and passengers avoid that damned place. Edmund, who himself is fearless, in attempt to lure his Miss Chumley to his bunk, frees his own hutch and moves to the mirror hutch on the other side: Colley’s hutch, which incidently will claim another victim ! A suicide of someone, who has just confessed to Talbot, that he is in hell!

Once more Golding has managed to write a very entertaining and interesting book. It really is a page turner. And now he has even instilled in us a curiosity about Talbot’s further adventures. Will they all reach Australia? What shall be the outcome of the encounter with lovely Miss Chumley? What shall be the fate of the wallowing old ship?

The impatient reader has to wait till Golding, our own pilot through the mists of our dark conscience, picks us up and bring us back to safety.