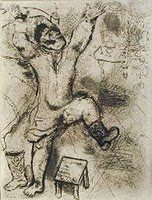 Known as a Parisian artist, Marc Chagall always maintained an interest in his Russian origins and his Jewish heritage, and he often depicted scenes from his youth in the provincial town of Vitebsk. After working and exhibiting in Paris from 1910 to 1914, Chagall returned to Russia, where he remained until 1922. There he formed friendships with Russian avant-garde poets and painters and worked toward creating a modern Jewish art through his journal illustrations, children's books, and designs for the Jewish State Theater.

Chagall was introduced to printmaking in Berlin in 1922, at the age of thirty-five. (He would eventually complete one hundred twenty-three intaglios and woodcuts, more than eleven hundred lithographs, and thirty-eight illustrated books.) He had arrived there with an autobiographical manuscript he had been working on since 1911. The gallerist Paul Cassirer saw the text, My Life, and hoped to publish a translation of it that would include prints by Chagall. Responding immediately to this new medium of printmaking, the artist completed his first etchings within three weeks. They were issued as a portfolio without text, due to translation difficulties with Chagall's unusual prose. Drawing on vivid childhood memories of village life in Vitebsk, the artist depicted himself, his wife and child, his parents, his childhood home, local figures such as the teacher of the Talmud, and events that had taken place there.

These scenes of life in Russia were still fresh in Chagall's mind in 1923, when he began the etchings for Nikolai Gogol's novel Les Âmes mortes, the classic Russian text that was to be his first book collaboration with the renowned publisher Ambroise Vollard. A notorious perfectionist, Vollard left twenty-five unfinished projects at the time of his death in 1939, including Les Âmes mortes. The volume was later completed in 1948 by Tériade, another of the great twentieth-century publishers of illustrated books.