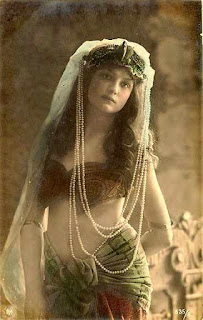 Kuchuk Hanem was a famed beauty and Ghawazee dancer of Esna, mentioned in two unrelated nineteenth-century accounts of travel to Egypt, the French novelist Gustave Flaubert and the American adventurer George William Curtis.
Kuchuk Hanem became a key figure and symbol in Flaubert's Orientalist accounts of the East. The orientalist themes that pervade his work depended heavily on his experiences in Egypt and his likely sexual liaison with Kuchuk Hanem. Dancers in two of his novellas, Herodias and Temptation of Saint Anthony, evoke a woman dancer who performs scenes from Salome and the Queen of Sheba. Both of these dances were standards of the repertoire of dancers of this period, especially a dance step known as "the bee" or "the wasp," with the dancer standing musing in a pensive posture until a buzzing insect flies into her clothing and she "flees" in terror, dancing rapidly, and removing articles of clothing in the manner of a provocative strip-tease. Later, Kuchuk Hanem was the subject of a poem by Louis Bouilhet, inspired by Flaubert's accounts from letters. Louise Colet, a one time of mistress of Flaubert, is said to have sought out the aging dancer on a trip to Egypt at the time of the opening of the Suez Canal, in order to report back to Flaubert the ravages that time had wrought on the woman he so admired.
It seems certain that she was also an influence for George William Curtis, suggesting that she was one of the most sought-after entertainers in Upper Egypt during the colonial period. Comparisons of the two narratives demonstrate a house with a courtyard, a stairway in poor repair leading to an upper room furnished with two divans, a young female attendant named Zeneb, an old man playing a rebaba, and an old woman who kept time on the tar (a tambourine-like drum).
"Kuchuk hanem" is not a proper name at all: it actually means "little lady" in Turkish and might be a term of endearment applied to a child, a lover, or a famous dancer. It remains unclear if this was a name chosen by the woman to represent herself to the colonial tourists, or if this is a careless, shorthand name used by the writers to describe her. Regardless, the sensationalized, eroticized presence of Kuchuk Hanem within the literature of this period underscores early misrepresentations of nonwestern women in the imagination of the West.