“A hero of our time” by Lermontov 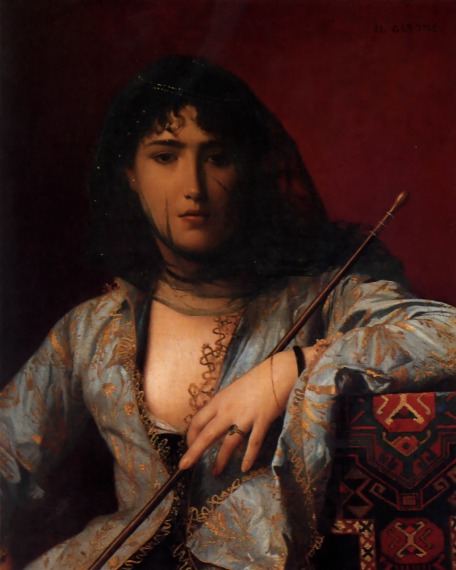 ﻿﻿﻿
This book is about beautiful women and how to seduce them.

I know, that “A Hero of our Time”, Mikhail Yuryevich Lermontov’s masterpiece is lauded as a major milestone in Russian literary development and that Lermontov is credited of making a bridge between the neoclassical and Romantic literature, that he accurately painted the “superfluous generation” and that he, as a pioneer, tentatively tried his hand at the psychological development of characters.

All true, but still for me, “A Hero of our Time” written in 1840, is a soldiers boasting yarn of how to seduce women. More than that, with the hero, Pechorin, being a Russian variant of the Byron-esque hero and a “Front-schwein” (an officer luckily), don’t expect too much nice subtleties, romantic frivolities or “happily – ever –after” scenes:

To cause another person suffering or joy, isn't that the sweetest food of our pride?

Pechorin is very much the fictional alter ego of the writer Lermontov. He too comes from a wealthy Petersburg family and is a trained army officer in the Russian army. He too, just like Lermontov, is sent away to the southern provinces of Russia, in the Caucasus to help subduing the locals.

Back in the 1840’s, the area of Dagestan and neighbouring Chechnya is as much the ass-hole of mother Russia as it is today. But the region is strategically so important and crammed with oil, that the Russian empire must keep a hold on it. The local warlords, with the exception of the collaborating “Princes” want to get the army of the Czar out. Yes, right, just like today!

Still, the dramatic settings of the mountain ranges of the Caucasus must be splendid. Lermontov’s descriptions show the awe, the isolated visitors must have felt when travelling trough that splendid mountain range, its dramatic backdrops and its sublime vistas. It brings to mind the beauty of that other region of eternal conflict, Afghanistan, described by (the other) Byron, Chatwin and why not Michener.

The impressive mountain range and the contact with the threatening locals does two things: it highlights the loneliness of the hero but also splits the hero in two and forces him into introspection.

The “hero” of the title is obviously used in an ironic way. Pechorin has all it takes to be a hero, but according to Lermontov, he, like many other young man of his generation is not given the space, the opportunity for great deeds.

Apart from the occasional skirmishes with the local guerrilla mobs a.k.a. freedom fighters, Pechorin is wasting away his youthful manhood in the emptiness of Dagestan. What distractions are available to our young officer in the wasteland of Dagestan? Hunt wild boars? Drink? Write Poetry? Play cards or gamble? All that, yes but there is of course also the chasing after the occasional girls! And “Girls” is what this book is all about.

Like the four Queens in the Whist card games these officers occasionally play, Lermontov describes four women in the different chapters of his book, each representing another kind of beauty. There is to start with exotic beautiful Bela, daughter of a Dagestan “ Prince”, followed by the mysterious – femme fatale – the Russalka from Taman. There is “Princess Mary”, a Russian Socialite lost in a Spa –town in the Caucasian Mountains and last but not least, there is the faithful Vera.

Lermontov presents these four women in four “cas de figures”, four examples of encounters with women and frames these stories between two short anecdotes where the universal laws steering live and love are briefly developed: the role of destiny, “la fatalité” and the temporality of our feelings.

Pechorin, in the beginning of the story, remembers an old woman, who when he was a child, told his fortune. She predicted that he would die at the hands of an evil woman.

But who is that “femme fatale”? And which one is the Queen of Hearts?

Bela, the sixteen year old beautiful daughter of an Islamic Dagestan “ Prince “is abducted on Pechorin’s request, exchanged against a stolen horse, delivered hand and feet bound, head shrouded in a veil, locked up like a wild animal and then literally tamed with food and gifts.

The taming takes time and Pechorin is warned:

You don’t know Circassian girls…They are not at all like Georgian girls, or the Tartar girls from beyond the Caucasus-not at all. They have their own rules. They are brought up otherwise.

Beautiful Bela will only give in, when the “Hero” threatens to abandon her and to return her to her destroyed family (father killed, brother gone) that her abduction initially caused.

Pechorin is attracted by her beauty but is not really bewitched by her. Being a slav himself, he seems to be immune to that disturbing magic emanating from her eyes ( black eyes like a hill chamois, that cast a look straight into your soul ). Hundred years later, this beautiful asian girl, will turn into a literary archtype and prefigure that Slavic femme fatale which will so bother Western- European modernist, writers like Eliot, Yeats and Hesse. I see Bela as the precursor of Mann’s Clavdia Chauchat with those haunting “Kirghiz eyes” and those strong cheekbones which gives her her “wolf – like”features. Incidently Thomas Mann too, influenced by Lermontov, made her come from Dagestan and Chauchat does not only mean “hot pussy” but also hints to vague Caucasian origins.

The affair started dramatically and thus should end dramatically. Once he had her, Pechorin, gets less and less interested in Bela who withers away alone, secluded. Pechorin is not their to defend her, when one roguish local tries to steal her. She is freed but fatally wounded.

Pechorin does nurse the girl while she is slowly and painfully dying but is absolutely silent afterwards.

One wonders what the piercing eyes of Bela uncovered in Pechorin’s soul.

2) The “Russalka” from Taman : going nowhere

If there is a “femme fatale” in Lermontov’s book, and that in a literally sense, it is the demonic water nymph Pechorin encounters in the seaside town of Taman. The mysterious eighteen-year-old girl actually tries to drown Pechorin for his efforts to make a pass at her.

Even tough Pechorin, does not find her a beauty, he is completely enraptured by her slightly loony appearance:

“ I have definitely never seen a girl like her. She was far from being a beauty, but then I have prejudices with regard to beauty too. There was a look of breeding to her… breeding in women, as in horses, is of great matter… “

“Her figure had an unusual suppleness to it, she had a particular inclination of the head; she had long light-brown hair, a sort of golden tint to the slightly sun-tanned skin on her neck and her shoulders, and an especially straight nose. All this enchanted me.”

“ I read something wild and suspicious in her oblique gaze, and there was something indeterminate in her smile but such is the strength of prejudice: her straight nose had carried me from my senses. I imagined that I had found Goethe’s Mignon, the marvellous creation of his German imagination”

Pechorin is falling. And falling hard.

Pechorin has discovered that the girl participates in a smuggling operation with her friend, a Crimean Tatar, a boatman from Kerchi. One night, to submit her to his will, he threatens to divulge her secret operation to the authorities. The “Russalka” is not in the least impressed, but counterattacks with a kiss – a moist and fiery kiss- and lures un-expecting Pechorin into a boat. After disarming him in a hot embrace, she tries to push Pechorin (who cannot swim) out of the boat and into the dark waters. She nearly succeeds, but Pechorin in a last effort, escapes her deadly embrace and throws her into the water.

His last vision of her, when he gladly realizes she made it to the beach, sounds like the aftermath of a steaming love scene:

(She was)… squeezing sea foam from her long hair. Her wet slip outlined her lithe figure and raised breasts.”

How is that for psychological development?

In the next chapter, we find Pechorin in the mountain spa resort of Pyatigorsk. The “haute bourgeoisie” and the aristocracy are flocking to the healing springs that erupt from the mountain. It is an ideal flirting ground and meeting place of the “mistresses of the water”. On his first walk, Pechorin meets an acquaintance, the twenty-year-old cadet Grushnitsky, who greets him like an old friend but of whom Pechorine feels “ that one day we shall bump into each other on a narrow road and it will end badly for one of us”.

Pechorin is here on familiar ground and he perfectly masters the wooing and seducing as it is played in the Caucasian Russophile “ high society”. ( It is the longest chapter )

Hanging around, he and Grushnitsky, soon enough see their next victim.

The second lady wore a high-necked dress in gris de perles, with a light silk fichu twisted around her lithe neck. Little boots du couleur puce were tightened at her ankle, and her lean little foot was so sweet that even those uninitiated into the secrets of beauty would unfailingly have exclaimed “ah” – even only in surprise. Her light but noble gait contained something virginal about it that escaped definition, but it was decipherable to the gaze. When she walked past us, an indescribable aroma wafted from her, the kind that emanates sometimes from the letter of a beloved lady.

This Princess Mary is very pretty, I ( Pechorin ) said to him. “ She has such velvet eyes- yes, velvet…Her lower and upper eyelashes are so long that the rays of the sun don’t reflect in her pupils. I love eyes that have no reflection; they are so soft, it’s as though they stroke you…However, it seems that everything about her face is pretty… but now, are her teeth white ? This is very important!


“You speak about pretty ladies as though they’re English horses” said Grushnitsky with indignation.

Pechorin in his successful seduction of pretty Mary causes even more havoc, than with Bela. He upsets and humiliates the Ligovsky family and their entourage, and in a twisted return of fate, shoots young Grushnitsky in a dramatic duel scene.

During the Ligovsky episode, Pechorin meets his old lover Vera again. The attentive reader understands that here true love is at work. Pechorin could easily elope with her and find peace in his relationship with her.

Alas, Pechorin has the Princess’s daughter on his mind and when finally the world around him collapses after the tragic death of his opponent and he turns back to Vera, she has disappeared.
Married Vera has confessed her love for Pechorin to her husband and as she leaves, Pyatigorsk tries to catch her back. Unfortunately his exhausted horse collapses under him and Pechorin fails to retrieve the one genuine love of his heart.

And maybe for the sake of Vera and true Love it is better so.

So what about that “premonition”?

I don’t know if the insult, that was the cause of writer Lermontov’s duel with his opponent Martynov, was about an affair of the Heart, a beautiful but cruel girl, challenging two young men against each other, but I like to think so. Lermontov foreseeing his own death, through the eyes of his own creation, does it get any eerier than that?