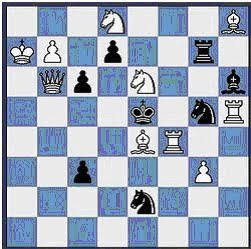 (White to mate in two)

The above-depicted Chess problem much preoccupied Nabokov’s mind at the moment he, his wife and their six year old son managed to catch the last boat out of France, away from a Europe that was collapsing under Nazi aggression.
Most people know Nabokov only from his Lolita reputation but Nabokov, born 1899, comes from a very well to do family of the Russian haute Bourgeoisie and he left behind a wonderful youth and countless sweet memories.

It is this lost period that Nabokov brings back to live in the fifteen beautiful chapters of his autobiographical book “ Speak, Memory”.

The chapters, which appeared earlier in different magazines all have their own subject but sometimes overlap. We learn of his protected childhood at their Roztestweno estate, south of St. Petersburg, his games with his brothers and sisters, his first loves, his passion for Chess, literature and collecting butterflies. Together with young Vladimir, we endure the French-speaking Swiss governess and the different crazy teachers and their strange methods of education.

We cuddle with our young Casanova in the arms of lovely Tamara in the cold draft of Nevski prospekt. We meet some strange and funny family members like his Uncle “Ruka” and the strange Zahar. The Nabokovs really live like Aristocrats in these last days of Tsarist Russia but when the Bolshevik nightmare engulfs the mother country, the Nabokovs have to flee, first to Crimea, to Greece and then to England and Germany.

But it is especially the many exquisite descriptions of the Ur- Russian scenes and sceneries which really made me enjoy this book. Here I give you as an example this description of his mother travelling to snow-covered st.Petersburg in a horse drawn sleigh :

I distinguished the light sleigh drawn by a chestnut courser. I heard his snorting breath, the rythmic clacking of his scrotum, and the lumps of frozen earth and snow thudding against the front of the sleigh. Before my eyes and before those of my mother loomed the hind part of the coachman, in his heavely padded blue robe, and the leather-encased watch strapped to the back of his belt, from under which curved the pumpkin –like folds of his huge rump. I saw my mother’s seal furs and, as the icy speed increased, the muff she raised to her face – that graceful, winter-ride gesture of a st. Petersburg lady. Two corners of the voluminous spread of bearskin that covered her up to the waist were attached by loops two the side knobs of the low back of her seat. And behind her, holding on to these knobs, a footman in a cockaded hat stood on his narrow support above the rear extremities of the runners.

The times of King and Queen were for ever “passé” for Nabokov and he found himself and his little family to be mere “ émigré”- pawns moved at the whim of different European administrations.

A real nice book and a good reading if you are somewhat romantically inclined.