The Infinity of Lists by Umberto Eco 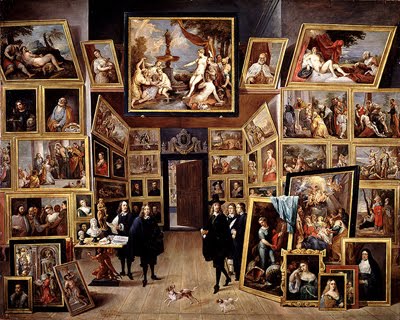 Do you remember what young Jim Hawkins and his scared mother found in the sea chest of captain Billy Bones when he collapsed quiet unexpectedly? Could you list the items collected in that fascinating burgher closet in which Bruce Chatwin discovered that piece of dinosaur skin found on the icy shores of Patagonia? Could you tell us, without cheating, what dear Leopold Bloom found when opening his drawer in his house in Eccles street ?

That is a pity, because lists, my dear friends are our last line of defence when engulfed by that dark chaos in which we live. They are our last ramparts to bring order to things.

This is true for shopping lists, to do lists, books to be read in 2010 lists, Top 10 of best Russian books and the basic existential reason which makes Booklovers use Librarything to turn their cosy chaos of un untended book collections into a professionally tagged, ready at hand, complete and organised Library.

There is unfortunately not much of Eco in this book. The book is in fact an anthology of lists, introduced by Eco and with some commentary added by the master to explain the numerous illustrations.

But the book is a gem. It is the kind of book you would like to give to a sensitive, artistic adolescent in order to push him or her gently towards “greatness”. This is the book you could put on the night table in the guestroom of the perfect house. You would offer mental rest together with your loving hospitality and safe comfort. This is basically the book you would hand to a sailor to comfort him when the chaos of the North – Atlantic - in – winter unleashes its chaotic terror.

This vast anthology of lists, more pictures than text hypnotizes the reader from the moment you open the pages:

- it catalogues all the Greek ships en route to Troy as described by Homer in "The Catalogue of Ships" part of the Illiad.
- It describes in all detail the world depicted on Achilles magnificent shield made by the god Hephaestus
- A list of all the devils, all the saints
- There are the Pannini depictions of art galleries
- There are depictions of Wunder – and Kunstkammers, cabinets of curiosities, rooms filled with “all the strange animals in the world”
- There is a who’s who depicted by David in his painting of The Coronation of Napoleon
- There are the Mesopotamian panels depicting battles, The Marriage of Thetis and Peleus and The Judgement of Paris and the Trojan War by Matthias Gerung, so full of figures that they really create a feeling of vertigo.
-
And so on and so on, the whole book is crammed with learned, insightful, provocative, intriguing and arcane lists who will keep you mesmerized again and again

Says Eco to an interviewer of the German “ Der Spiegel” :

The list is the origin of culture. It's part of the history of art and literature. What does culture want? To make infinity comprehensible. It also wants to create order -- not always, but often. And how, as a human being, does one face infinity? How does one attempt to grasp the incomprehensible? Through lists, through catalogs, through collections in museums and through encyclopedias and dictionaries. There is an allure to enumerating how many women Don Giovanni slept with: It was 2,063, at least according to Mozart's librettist, Lorenzo da Ponte.

'We Like Lists Because We Don't Want to Die'