The Siege of Krishnapur by J.G. Farrell 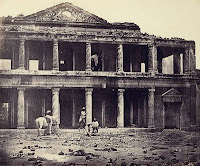 One should only review books when feeling healthy and relaxed but I was neither when reading Farrell’s “Siege of Krishnapur”, fighting off a nasty flue during the yearly budget excitement at the office.
I was looking for distraction and consolation in the pages of Farrell’s work, but for my effort got much, much more than that. This fictional account of the resistance of an English community against the insurrection of the sepoys, somewhere on the plains of India, has turned out to be an intelligent, very witty and gripping page-turner.

When Farell won the Booker prize in 1973 with his account of the Mutiny, his talent easily made him one of the most promising writers of the UK. Unfortunately, Farrell drowned in a tragic fishing accident during the same infamous ‘79 storm that caused such havoc in the Fastnet sailing race. Farrell and his work have been, since then, undeservedly but slowly slipping under the radar of the literary community and it is not unlikely that they will fare the same fate in the end as the lost city of Krishnapur. The reputation of Farrell's masterpiece flared up only once or twice during the election of the “Booker of Bookers”, when it was strongly defended as a potential winner, but the author's vision on India’ s first “war of independence” was no match to Salman Rushdie's grandiose description of the Moods and Minds on the subcontinent after the Independence.

The siege of the fictional town of Krishnapur that Farrell describes was based on the real experiences of British subjects during the siege of Lucknow in 1857 when the Indian indigineous soldiers rebelled against their former masters. Farrell used the many letters, journals and reports which were written by the survivors of that siege as a basis of his account.

The town of Krishnapur, an outpost of British civilisation lost on the Indian plains finds itself one day besieged by the sepoys, the insurrecting native soldiers of the British army. As the town organises itself to defend its inhabitants and to survive the siege, characters develop and established ideas and values are put under strain. The fightings, the illness, the famine and the heat are decimating the population until only a handful survive. They have by then been stripped litteraly to their bare essentials.

Farrell’s book is an easy and smooth read. Actually, it can be just as well be read as an adventure story. And a good one indeed ! The scenes where the colonials are retreating to a smaller camp under heavy attacks of the sepoy army are very tense and gripping.

And the descriptions of day-to-day life under siege conditions are gripping too. The sights and smells of the siege are vividly conjured. The stench of putrefaction permeates the scenes of amputations, infections, illnesses, miscarriages and other byproducts of men at war.

But Farrell does not write a dark book. Often it is very funny. Regularly when the situation becomes too tense and too horrid to behold, Farrell liberates the reader with a pun or a joke. Farrell is a master of the kind of humour we are now encountering in such blockbusters as “Pirates of the Caribbean” or “Indiana Jones”. I’ll give an example: during the last stand of the English community, when the exhausted people of Krishnapur are for the last time trying to fight back, one of the English characters is experimenting with a revolutionary new gun. As it misfires constantly, he gets closer and closer to getting killed, but he keeps on tinkering with this obsolete weapon, until we the exasperated readers, nearly start screaming at him “ take another gun, you bloody fool!
In that sense it is a very cinematic book and one wonders why Hollywood has not be interested in this Bollywood spectacle?

But for all the adventure and the fun, “The siege of Krishnapur” is also a very interesting novel of ideas.
First of all it’s a unforgivingly exact portrait of the British in 19th century India. The book analyses several topics like the Victorian attitude to progress and how this attitude changes during the siege. The characters under a rain of bullets discuss religion, bogey scientific theories like phrenology and what might be the best scientific way to cure cholera. You are not likely to forget the discussions on cholera and certainly not it’s hideously funny macabre conclusion.

Farrell explores how and why these starched Victorians start to wilt, and where their breaking point lies. There is a scene where a beautiful girl is attacked by millions of tiny flies which is so outrageously funny, you will have to put the book aside to gasp for air.

Farrell said that he wanted to show "yesterday reflected in today's consciousness", but by association, of course, he also holds a mirror up to the modern world. His comically detailed descriptions of various residents' losses of faith - coupled with their outlandish religious beliefs and the way they adhere to now discredited theories like phrenology - forces us into a hard look at the accepted wisdom of the modern world.

Then, there is colonialism. The book has been criticised for cultural imbalance because in “the Siege of Krishnapur” the points of view of the Indians are almost nonexistent. But together with the besieged we are quiet happy that the “sepoy point of view” remains well outside the barricades. The criticism is unfair, the book is less about how the Victorian English react against the outside world than how they react to their “inside world” when everything they stand for collapses. In the book, the Indians become litteraly spectators, looking at the horrible scenes from a hilltop under the shade of their umbrellas and with binoculars not to miss any of the juicy details.

Finally, I'm really tempted to say that this is the best Booker winner I've read so far. As John Spurling said in “The New Statesman”: For a novel to be witty is one thing, to tell a good story is another, to be serious is yet another, but to be all three is surely enough to make it a masterpiece.