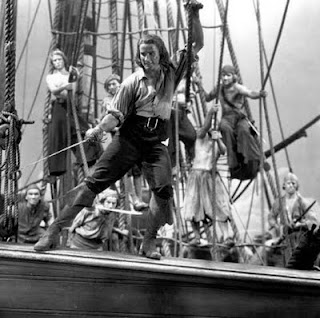 The guy on the picture on the left is a pirate, a genuine buccaneer. Oh yes he is! Maybe not a real pirate but certainly a thief and a swindler, a liar and a slaver, he is a drunk, a bum, a deserter and a…

But he is a pirate too. And like all pirates, he is chasing a treasure. A treasure, not of gold and diamonds and pearls, but a treasure in the shape of a career as a famous Hollywood actor. He wants to be free of money worries, to be famous and to have all the beautiful girls in the world and you know what? He goddamn succeeds because this sword wielding, heroic-looking actor is Errol Flynn and you, who went to the movies before 1955, you loved him! You put his picture above your bed and you saw all his movies because he was so unique, he looked so dangerous!

Indeed the path that led the Tasmanian devil Errol Flynn to Hollywood, as told in his autobiography “My wicked, wicked ways”, reads like a real pirate story. Well written, captivating and full of the tall stories you might expect to hear in a bar in an exotic location.

The guy manages for example to blow up his own boat, when a shark which he has been feeding a bar of dynamite hides under his canoe. In another adventure, he puts snake poison on a fighting cock’s beak in order to win the bets in the gambling underworld of Manila. He exchanges with a village chief, an invented magic formula’s against slaves he needs to dig up gold from his gold-less mine.
In the Australian outback, he castrates hundreds of sheep, by biting off their testicles. And so on, and so on, all told in a fluent, brash, macho style.

Unfortunately the text has been edited for a post war American public and we sense that Erroll is omitting the juiciest parts. Tell us more about the bordellos of Marseille, Flynn. What happened in the Opium den with that lovely half-blood? Tell us more Flynn, tell us more.

Alas, like all good pirate stories, the treasure is doomed and from the moment Flynn succeeds in realizing his dream, luck and happiness start slipping through his fingers.

First Flynn manages to get stuck in a marriage where domestic violence seems to be the rule. Then, Warner Bross. gives him the same roles and characters in each movie, so that his talent does not get a chance to show its diversity. Girls come easy with his fame and he is accused of statutory rape three times! Flynn is acquitted every time but his reputation suffers. Ex wives, unreliable advisors, expensive lawyers and an immoderate lifestyle keep him at the brink of bankruptcy. All these problems lead the pirate to more alcohol and sometimes drugs.

Nonetheless Flynn manages to convince us of his loneliness and one starts to sympathise with the guy. Although he claims at fifty to be still going strong, we know that his end is near.
But his story is a captivating one and it is with pleasure we would buy him another drink to keep him with us at the bar.

Too bad, Flynn, we never met.