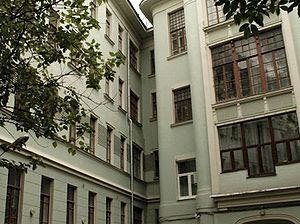 
The communal flat at Sadovaya nr. 50, better known in Bulgakov’s masterwork “The Master and Margarita” as the Naughty Apartment houses today a museum commemorating the life and work of the famous Russian author. It is located about two blocks from Patriarshiye Ponds, the scene of the opening chapter of the novel, where the Moscow city government has erected a statue commemorating the artist and his novel. The once luxurious rental house, constructed by millionaire Ilya Pigit, owner of the tobacco factory Ducat, was refitted for the first working commune after the revolution. The communal flat № 50, where Mikhail Bulgakov and his wife lived in 1921 – 1924, became the prototype of that Odd Flat, where Voland with his court settled up, and from where the mysterious stairs led to another dimension. It is said that one can still feel the Devil presence when touching the walls.
For more, see the superb site devoted to the Master and Margarita :
http://www.masterandmargarita.eu/en/index.html