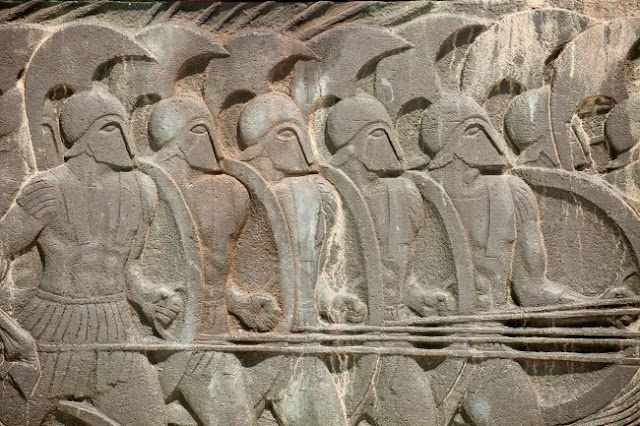 Lately I have been reading, enjoying and schooling myself with the 2400 year old "Anabasis" written by Xenophon.

The story relates the ordeal of the 14.000 Greek mercenaries who enter the Persian Empire in 401 BCE, commissioned by the Persian prince Cyrus (the Younger), in his attempt to dethrone his older brother King Artaxerxes.

But things do not go as planned and the mercenaries get themselves stranded a few kilometers from the city of Babylon (the actual Bagdad), deep into enemy territory and with all their senior commanders dead. The troops however are feared Hoplites and the army of Artaxerxes hesitates to launch a frontal attack, even at the moment when the Greeks are at their weakest. This gives these foreign phalanxes just the few days they need to reorganize and elect new leaders.

Enters Xenophon. It is a bit unclear why this 30 year old, well-educated scion of a wealthy Athenian family, is among these fighters, but in this moment of confusion and chaos, he stands up as one of the new leaders. Their new objective: get the army of mercenaries out of Persia as fast as they can. A march of 1500 km through unknown and dangerous territory, surrounded by numerous hostile armies and tribes, awaits them.

It is no wonder that such a story still captivates the mind.

I have read Xenophon narration in the illustrious Robert Strassler's Landmark edition. This is a series of important historical texts, translated and annotated by numerous specialists in the field. Lavishly illustrated with maps, with detailed drawings of battle formations and with pictures of the actual sites, these books make a huge difference on the reading experience. If there is a proof that digital reading will never fully replace reading a paper-book, this is it.

Xenophon’s Anabasis (which basically means an "inland march") turns out to be a detailed report of the long retreat to get out of enemy territory. Its main attraction is that it is written on the level of the individual grunt; no great overarching strategic vistas. It is continuous "problem solving" on human level. Do we attack or negotiate? Do we cross the river or not? Shall we advance or wait? And this with the continuous concern to keep the vanguard and rearguard safe and the distance between them never dangerously overstretched.

Besides turning out to be a very capable and humble commander, Xenophon is also a perfect narrator. Even though he is an Athenian, he has strong and open sympathies for the Spartan lifestyle: resilience, perseverance, grit. No wonder he is banned from Athens. And he couldn't care less. Xenophon was an early student and follower of Socrates, and he was disgusted with the Athenian city for the condemnation of the famous philosopher. His Anabasis therefore can somehow be read as Socratian philosophy applied to a long survival situation.

Tough as steel in battle, proud when deserved but humble when in error.