the Ink Trade by Anthony Burgess 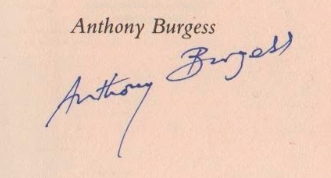 Reviewing the reviews of Anthony Burgess

For those whose idea of sheer bliss is reading literary reviews in their favourite newspaper on a rainy Sunday afternoon, (maybe followed by an invigorating nap curled up on the sofa), this book helps you to conjure exactly that pleasant feeling again and again.

The Ink trade is a collection of sixty excellent literary reviews published between 1961 and 1993 in numerous journals and papers. Reviews of those very novels that excited us in the last decades of the previous millennia and on top of that written by Anthony Burgess, pen-man “par excellence”, a peer reviewer so to say, for he was both writer and a prolific reviewer at the same time. His reviews are understandably different than those by academics like Davenport, Kenner or Kermode.

Burgess is the man who is famous for his “..clockwork Orange", infamous for the opening line in his "Earthly Powers” and enormous for his entertaining biographical dyptique "Little Wilson ..." and "You’ve had your time". He is a brillant writer, clever, witty and with a sharpened quill.

I've always had a special affection for Burgess. With his “Here Comes Everybody” and his "shorter and edited Finnagans Wake”, it was he who “explained” Joyce and Eliot to me, at a young age where neither my secondary school teachers nor my reading experience could have helped me.

Reading reviews of books already read, reminds us of the joy we experienced when reading them for the first time, when we were 30 or so years younger. But it is titillating to compare our own weak riminiscences with Burgess take on the same book. He discusses Burroughs’ Naked Lunch for instance, Desolation Angels by Kerouac, Lowry’s Volcano, Nabokov’s nymphe, Hemingway’s cojones and Eco’s rose. There is also ( Noblesse oblige ) a lot on Eliot’s Waste land and Joyce’s Dublinaria.

In some cases Burgess reminds us of books we might have passed by, forgotten or totally misssed. In my case Evelyn Waugh for instance, whose titles I hurriedly jotted down, a bit ashamed I must confess.

The format of the review makes this collection an easy reading, freeing time for the thinking and the enjoying. For enjoying is what it is all about. Burgess famously was a brillant word craftsman. Working like a goldsmith he embelishes his text with exquisite handpicked words, looping filigreed sentences and shiny marvels of expressions.

Some people take antidepressants to chase anxiety away. I read a Burgess review and have sweet dreams.