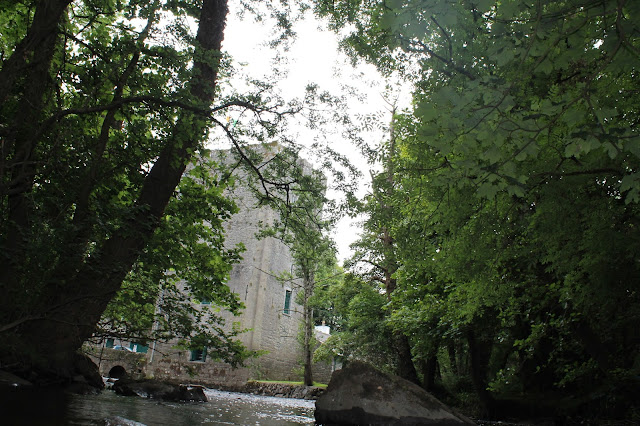 During my trip to Ireland a few weeks ago, I managed to visit the Irish Túr Bhaile Uí Laí  (Thoor Ballylee) Castle hidden in a small wood, its fundaments lapped by the Streamstown river.

It is a fortified, 15th century Norman tower house, better known as  Yeats' Tower because the famous Irish  poet once owned and inhabited the place as a summer retreat from 1916 up until 1929.

It is a magical place. The silence of the area, the quietly streaming river, the grey stones of the castle…it had everything to sooth our minds.

It was the morning after that dreadful terrorist attack in Nice. We learned about it the evening before quicker than the newspapers, because one of our  youngest boy’s classmates, dodged  the attack by escaping to and hiding on the beach.  The frightened kid snapchatted or whatsapped the ordeal in  realtime as they say – you know how 13 year olds are –to his schoolmates.

The happenings in Nice were still ghosting through my mind as I wandered through the castle. It was such a quiet and romantic place, so peaceful and so in contrast with the outer world and I said so to the lady who kept an eye on the place.

Yeats had once remarked "Everything is so beautiful that to go elsewhere is to leave beauty behind." This Thoor had inspired many romantic poems.

“Oh this was a violent place too in Yeats time” she answered. It was IRA country back then. “The bridge over the river was bombed in Yeats’s days – they did not want him around”. “Someone killed a priest not far from here…and a pregnant woman holding a child.

Shot her in her face just for no reason”.


The river did not mind and kept gurgling away and I, illusions shattered, followed the stream to try to capture a peaceful, romantic picture nevertheless.