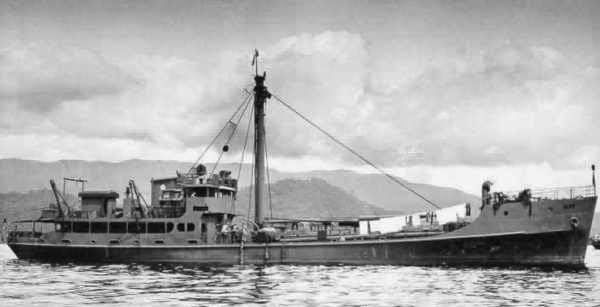 Nineteen years only is a precocious Gore Vidal when he writes his first book, a captivating sea yarn titled Williwaw.

In this story, we closely follow the crew and passengers of a small US Army supply ship that navigates between the different ports of the Aleutian islands. There is not much fighting going on, ( the Japanese are not aiming North - East ), but there is another ennemy, as dangerous : the dreadful weather of the high North and the terrifying Williwaws, sudden storms, characterized by their extreme violence and short time-span.

Vidal was inspired by his own experiences and the stories he heard when he was a young sailor on a similar boat in similar seas. It is a gripping tale of survival, with character development along the way, but it deals also with the same kind of moral issues as in Mailer's "Naked and the dead".

The narrative gets it's realism from the conversations and interactions of a handful of people : The taciturn, but very experienced skipper, the mates, the chief and a few passengers, officers and a chaplain, who have embarked for a short passage. There are but a few descriptions of the environment and the ship.

It is, however, the unconventional treatment of the different issues ( there is not only the storm ) that set this work apart. Unconventional in the sense that every writer of an "airport - bestseller" would construct the narrative so that the dramatic highlights would develop in a parallel way and climax together. Not so with Vidal who keeps things apart and by this unconventional plot infringes on the comfort of the modern reader "who has seen it all before". The stress in these pages is not build up page by page, it is there constantly, at least when the boat is out at sea, and the reader can only relax each time the ship enters a harbour or drops anchor in a protective bay.

The signs of something bad happening - or not - are numerous and the reader is as unsure as what might happen as the experienced skipper Evans, who looks constantly at the sky, the sea, the birds, the barometer and his detailed maps of the Aleutian islands.