Silent, upon a peak in Darien... 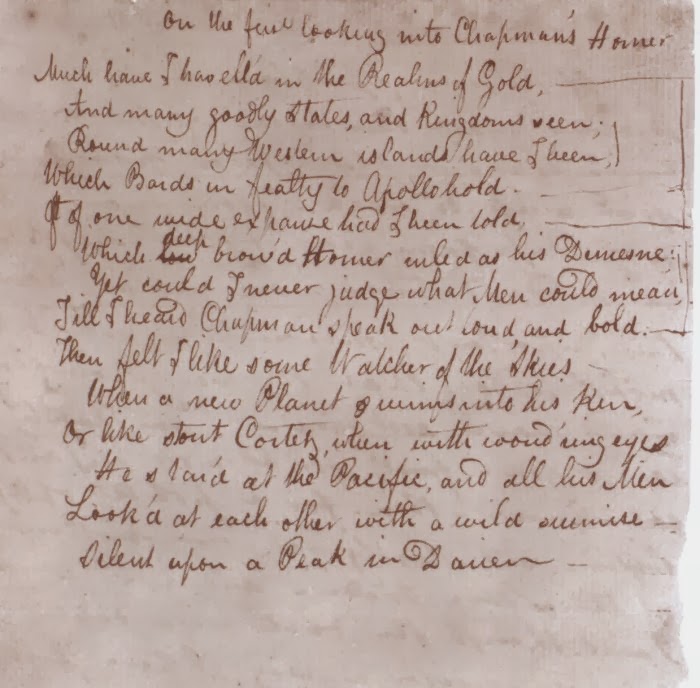 On First Looking into Chapman's Homer

Much have I travell'd in the realms of gold,
And many goodly states and kingdoms seen;
Round many western islands have I been
Which bards in fealty to Apollo hold.
Oft of one wide expanse had I been told
That deep-browed Homer ruled as his demesne;
Yet did I never breathe its pure serene
Till I heard Chapman speak out loud and bold:
Then felt I like some watcher of the skies
When a new planet swims into his ken;
Or like stout Cortez when with eagle eyes
He star'd at the Pacific — and all his men
Look'd at each other with a wild surmise —
Silent, upon a peak in Darien.

"On First Looking into Chapman's Homer" is a sonnet written by the English Romantic poet John Keats (1795-1821) in October 1816. It tells of the author's astonishment while reading the works of the ancient Greek poet Homer as freely translated by the Elizabethan playwright George Chapman.


The poem has become an often-quoted classic, cited to demonstrate the emotional power of a great work of art, and the ability of great art to create an epiphany in its beholder.