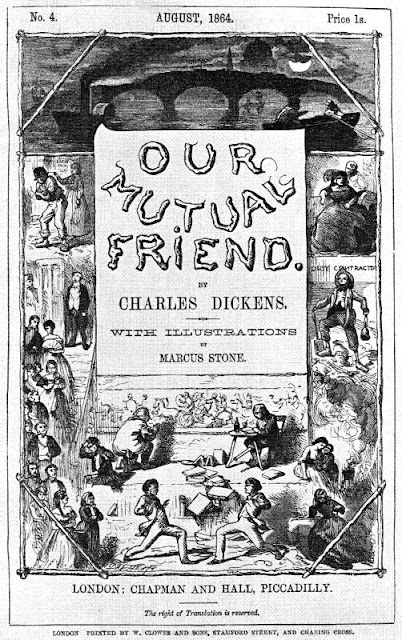 Four books organized with three proverbs and allowing us nineteen months to read it.

Our Mutual Friend, like most Dickens novels, was published in 19 monthly instalments, each costing one shilling (with the exception of the nineteenth, which was double-length and cost two). Each issue featured 32 pages of text and two illustrations by Marcus Stone.

BOOK THE FIRST: THE CUP AND THE LIP

There's many a slip 'twixt the cup and the lip is an old English proverb. It implies that even when the outcome of an event seems certain, things can still go wrong.

A Latin form is found in Erasmus's "Adagia," I.iv.1 ("Multa cadunt inter calicem supremaque labra") which appears to derive from an epigram by Palladas in "The Greek Anthology" (X, 32).

The proverb supposedly comes from a Greek legend in which one of the Argonauts returns home to his winery. A local soothsayer had previously predicted the Argonaut would die before he tasted another drop of his wine, thus the Argonaut calls the soothsayer and toasts him for the Argonaut had survived his journey. The soothsayer replies to the toast with a phrase corresponding to the English proverb. As he finishes his toast, the Argonaut raises a cup filled with wine to his lips but is called away to hunt a wild boar before he could take a sip. The Argonaut is killed hunting the boar.
The first occurrence of the proverb in English, according to the Oxford English Dictionary, is in Thackeray's Pendennis, 1850

BOOK THE SECOND: BIRDS OF A FEATHER

Birds of a feather flock together = People of similar character, background, or taste tend to congregate or associate with one another.
The expression appears to have surfaced in the 16th century, allegedly a literal translation of Plato's Republic.

In 1545, William Turner wrote a version of the expression in The Rescuing of Romish Fox: "Byrdes of on kynde and color flok and flye allwayes together

BOOK THE THIRD: A LONG LANE

Commonly used as an assertion that an unfavourable situation will eventually change for the better
Long runns that neere turnes.
[1633 Stationers' Register (1877) IV. 273 (ballad)]
It's a long run that never turns.[1670 J. Ray English Proverbs 117]
It is a long Lane that never turns.[1732 T. Fuller Gnomologia no. 2863]
It is a long lane that has no turning [1748 Richardson Clarissa IV. xxxii.]

BOOK THE FOURTH: A TURNING