“Conquest of the useless: reflections from the making of Fitzcarraldo” by Werner Herzog 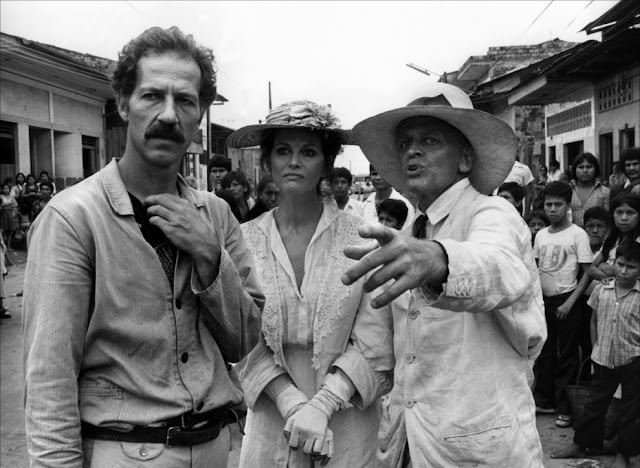 What writing style fits mad endeavors? What format functions well to relate chaos? After finishing “Conquest of the useless: reflections from the making of Fitzcarraldo”, I came to the conclusion that it must be the journal, or at least the journal of such a genius as is the film director Werner Herzog.

Most of us are acquainted with Herzog and his stupendous movies. Aguirre, Nosferatu, Cobra Verde and more recently Bad Lieutenant, are part of our collective film-o-graphic memory. And although the German moviemaker’s reputation has in the past decades slowly moved from pure Art house to that silver lining of mainstream appreciation, there is no doubt that he will never be of the boring mass. Iguanas and jiving dead bodies are just not everyone’s cup of tea.

Herzog is both the last and the apex of a generation of moviemakers who forsake the studios to go out in the world to capture both the truth and a poignant story. No gimmicks, no card board settings, no digital corrections or mock – up’s. Only true images, true settings and true emotions. For what is less known to the larger public is that Herzog is a documentary maker first. It is well worth to get out of your couch to get a view of such reportages as “The great ecstasy of woodcarver Steiner”, “Bells from the deep” or “Grizzly Man” to understand how Herzog creates his movies both in his inner eye and on the silver screen.

In “Fitzcarraldo”, starring the infamous Klaus Kinsky and the lovely Claudia Cardinale, Herzog recounts the story of Brian Fitzgerald, an obsessed Opera lover whose dream it is to build an Opera House in the middle of the Amazon jungle. To acquire the necessary funds, Fitzgerald develops a business scheme which should bring him a fortune: he plans to bypass the dangerous Pongo de Mainique rapids on the Peruvian Urubamba river, who hamper a shipping liaison between and the Rubber fields, by hauling a boat over land to another nearby free flowing river. Ambitious enough, but unfortunately the only suitable small strip of land over which the ship has to be moved is not only primeval jungle but also a steep hill.

Fitzcaraldo, as the Indians call him, will embark on his impossible enterprise, and with a monomaniacal rage tear his boat over the jungle mountain. A work of immense folly, requiring unprecedented resources and even human sacrifices. All for the sake of Opera. Art has effectively replaced God in this man’s mind.

Now to capture realistically on film what his main personage wants to do, Herzog has no other option than…to pull a ship over a jungle mountain in the middle of the Amazon.

With poor financial backing, filming in the middle of the jungle, in a region on the brink of war, with hundreds of unruly indigenous extras, huge engineering challenges, sickness, accidents, floods and revolting and mad actors, Herzog films his movie

And while Herzog’s endeavor appears to be as monomaniacal as Fitzcarraldo, it is his journal which shows the truth.

The journal appears to be a real journal with numerous dated entries. Each entry describes something Herzog witnesses. Images, micro-scenes. A spider for instance.
A spider big as a hand, hidden in his shoe, feeling like a sock. Or a dying kitten, attacked by chicken, half –eaten by the chicken. A dead child. A sad mongrel of a dog. A woman nursing a pig, a woman nursing a dog. A drown man. A drown man washed out of his shallow grave by the rising river. A drunk man lying on the ground, a drunk woman sprawled on the ground showing her private parts. Mud. Rain. Heat. The river rising, the river dropping, “click”. A freed Anaconda slipping into the grass. “click”. Another frame “click” and another frame.
Werner Herzog thinks in pictures, in images, in “Bilder”. You imagine him framing the scenery between his hands, thumbs and indexes touching. Click, camera switched on, recording. He said it. “Ich woltte dabei sein”, I wanted to be there “mit eine Kamera”.

Images, like cinema stills, framed realities jotted down in his journal, a whole book full, page after hallucinating page. Herzog is a visual artist, he thinks, dreams, fantasizes in pictures, cinematic stills, nearly no movement, just a bit, to show it is real, details, his eyes catches details, details which hide heart-breaking stories, hint at parables expose worlds…

Images, not stories is how I remember all his movies. The Bat flying towards us in “Nosferatu”; the rats in the street in the same movie; Aguirre standing on his raft, chasing the small apes; A boat in the jungle, pulled over a mountain. A man standing with his back to an approaching bear.  An iguana. Kaspar, the abused mystery child, exposed at the market. The ecstatic open mouth of the ski-jumper Walter Steiner…The narrative, if any, is forgotten. Images remain.

Werner Herzog, inheritor of Lotte Eisner’s demonic genius…His journal like a pointillist painting, every entry a dot, a speck on a large canvas that slowly emerges, a canvas depicting human folly, inhuman endeavor and a master – director, icy calm amidst a mayhem and a chaos, he is directing in the name of his Art.