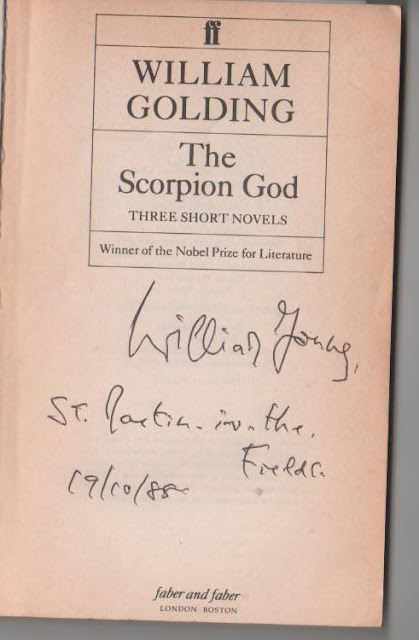 I recently purchased this signed edition of William Golding's "The Scorpion God".

The signature however, when compared to handwriting samples on the internet, looks rather akward. Doubts are seeping in. Is it a genuine signature of the master, a bit strange because he signed the book in a hurry, or in a standing position, book in hand or is it a fake ?

I submitted the question to three parties: a knowledgeable friend, the William Golding website team and the bookseller:

a) the knowledgeable friend concluded as follows :

About WG's ( William Golding’s ) signature, it doesn't look like his at all. The G is backwards, and both the G and the W start in the wrong place on the stroke. (…) in the opinion of this expert, it's a fake. Even if WG was standing or in a hurry, he would still do his strokes in the same way, it's an ingrained habit.

Many thanks for your interest. I'm afraid we're not signature
specialists! You might ( try ) Rick Gekowski, the book dealer, perhaps.
With best wishes,
WGL Website Team

I am very sorry that you were so disappointed with the book and convinced that the signature is a fake. The irony is this - this is one of my books that I actually got signed personally by the author on that date in St Martins-in-the Fields. However, I obviously do not expect you to take the word of a complete stranger, especially after the advice you have received.
I will of course give you a complete refund, including the cost to you of returning the book,(...)
Once again, I am sorry for your disappointment in this transaction. (...)

( He sounds like a nice guy, he is probably a nice guy and has a 5 star ( Very trustworthy ) rating at ABE books )


I submitted the signature to several friends. People who advised me to keep the book outnumbered the ones who told me to send it back.

“I'd keep the signature, who knows?”

“Hold on to the book. I sign my name several different ways. Totally mood dependent. Where are Golding's papers kept???? Get someone to copy some pages with G' s and W's. To me it looks like the writing of someone with a tremor - making an effort to write neatly.”

“It totally could be genuine, Mac. I'm convinced it is. The sigs I googled are mostly shots of the same signature, not different signatures. Have you tried placing Golding on that day in SMitF? If it was a lecture or signing or something. But really, it wouldn't bother me for a sec. If anything, seeing one of those perfectly legible, just so sigs supposedly by a man close to eighty (?), THAT would be suspicious.”

“For not much money involved, the forgery could be more interesting than the signature.”


"I guess it depends on what you intend to do with it and how much you paid for it. It's plausible that it is indeed his signature, as people's signature change through time. I'm sure you compared his autograph in 1950 to 1988, it would be kinda different. Given that it was in 1988, Golding was quite old then, so I duno if that explains it."

“Interesting dilemma. It sure doesn-t seem to be the same guy in the two, but at the very worst yours is a somewhat careful copy. would someone do that? is there enough money in it? I would be surprised if he dealer was lying, but...In other words, there is reason to come down strongly on both sides. I decide on fraud just because of the slight slight slight miasma brought on by the dealer-s -it just so happens that this is one of the few signed books I personally...”

Further googling gave me a sample a signature done by William Golding in 1980. This one looks already more like the one in the book. 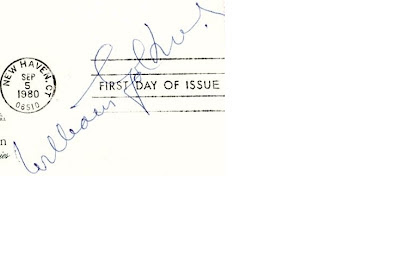 TC advised me to heed Werner Herzog's wise words: "To acknowledge a fake as fake contributes only to the triumph of accountants".

I chose to keep the book.

Hello ( ...) - thanks for your communication and for the interesting debate about what's fake and what's not! I must say it felt a bit odd to see my motives discussed in a public forum. And some of the comments baffled me - the one about miasma miasma miasma?? which seemed to condemn me with words i never used. like a wicked courtroom lawyer. A number of points come to my mind. The fact that I have a 5star rating with ABE doesn't actually mean much - unlike on eBay where the ratings are based on very clear criteria - the ABE system is based on order fulfillment only. Another point, that none of your colleagues raised - why would a forger add place and date, giving more handwritten clues as to authenticity or the reverse?

Now, as to the meeting with WG. I have to cast my mind back nearly a quarter of a century for this one. I know I went with my father, who was a writer and broadcaster, and knew Golding. (...)I remember that WG was not well at the time. And I also remember asking him some questions about 'Lord of the Flies',  which I was using with my students back then. One thing he said really stuck in my memory. I asked him about the dead pilot, who seems to come alive when his parachute is caught by the wind and causes him to sit up (you remember?) - Golding said that he meant the pilot to represent History - it's dead, but it won't lie down! I was amazed by the exactitude of this image and I've never forgotten it.