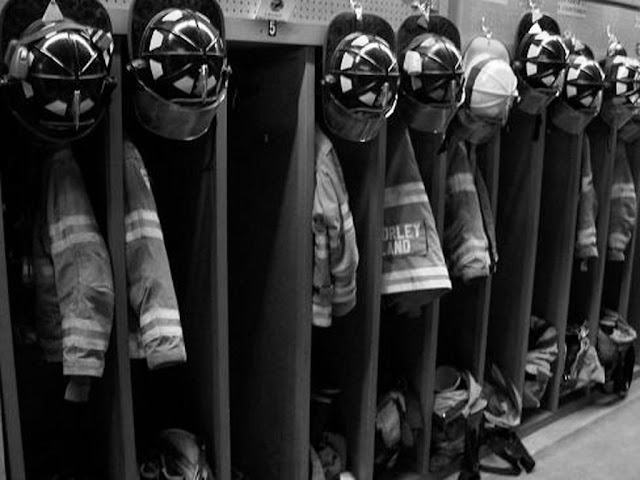 Dystopian societies in reality are Monsters, in the Latin sense of “Montrum”, a sign of the gods, a warning of what could happen. Writers inflate an actual perceived problem into a complete fictional new world, in an attempt that their work might function as a warning. A Cacotopia says as much about our present fears than about a possible future.

Ray Bradbury wrote his dark story in 1953 and now that he has reached the venerable age of 91, he might even experience some of the predictions he set in a not too distant future. Fortunately all has not happened…yet, but on the other hand we are not safe either, for some things are evolving rather in the wrong direction.

The book is set in an of a near future. In this society, a kind of Mega suburbia, books are banned and Firemen instead of extinguishing fires have the parodoxical task of setting fire to (horror of horrors) the last remaining books! Books are destroyed because it is feared that they contain ideas and ideas can only disturb a society once it thinks it has attained perfection. Whatever books are still found they are joyfully torched.

One of the firemen, a guy named Montag (a weekend has passed since man was a savage cannibal), after bumping into a mysterious “flower” girl, experiences a kind of consciousness crisis and starts to ask existential questions. Meeting the girl is a first of a series of epiphany - kind encounters, one with the lovely girl, one when he sees an old woman who dies in the flames with her books, one when he has a chat with a lonely intellectual. The old man’s tale makes Montag think and reject the society in which he has been living up till now.

One prediction of Bradbury has already proved true. Discarding books, people turn to the telly for their entertainment. Not the black and white gizmos of the fifties, but the televisions of today, flat and furious, HD, Herzy, Megapixly, wall-wide and surround soundy. High-tech indeed, but the programs, as we have already been accustomed to, are moronic to the core: endless sitcoms, reality tv stupidities and a constant stream of “breaking news” interruptions. Sound familiar doesn’t it?

People seem to be really doped by this room invading television, Montag’s wife sure is but it doesn’t make her happier. One evening, Montag finds her collapsed, filled with pills, an attempted suicide. In this future society, suicide is so common that some kind of plumber - intubation teams drive around to rescue people. They plug their tubes in all the orifices, pump pump pump, and they are away for their next call.

Another way to escape boredom is car violence. The streets at night have become the playground for sadistic youth whose idea of fun is to run down any lonely walker who has the carelessness to walk on the road.

The originality of Bradbury’s desensitized utopian world lies in the fact that it is self- inflicted. Indeed, it is the citizens themselves who have backed away into this world where critical thinking has been banned. I think it is one of the most poignant messages of Fahrenheit 451, that as a herd, we don’t necessarily need an enemy to close us up, the fear of an enemy, real or imagined, is sufficient to give up our own liberty.

Now it seems that Montag has been a naughty boy. In a secret closet, out of curiosity for what his job makes him destroy, he keeps some books. One of them is, hallelujah, the Bible. Montag starts to act queer and his boss and colleagues find out rather quickly what is wrong with him and they send the dog after him. The dog is some creepy electronic Doberman with six paws and a lethal needle between its jaws.

Montag flees, escapes the dog by crossing the river and falls in the hands of some literary hobos, all bookish people, professors, editors and critics. They gather around the fire in the woods. They want to know what Montag has read, because they can, thank you lord, excerpt whatever you have been reading out of your brain. Great, nothing is lost. Reason triumphs.

Mass culture, commercialism and the disappearance of objective criticism , today are already “de rigueur”. We are more controlled than we dare or want to admit. Books are under threat too. They are not burned yet, but they are massively changed into digitalized version. Digitalized versions are easier to manipulate. They can even be changed when you have already paid them and they are (you think) safely in your reader. In 2009 Amazon from a distance, was able to erase, both the books 1984 and Animal Farm in the Kindle of their customers. In the wake of mass international protest, Amazon apologized and promised not to repeat such an action. Maybe, but we are warned that it is possible.

So while Bradbury’s Fahrenheit feels a bit dated here and there, I find that the messages he brings remain actual. Even after 50 years, we should not erase this one from our shelves.