The title of Serena Vitale’s book “Pushkin’s Button” sounds better in the original Italian “Il bottone di Puskin”. It is a detailed account of the last days of the great Russian writer who was killed in a duel on 27 January 1837 by the unnamable Baron Georges d’ Anthès, (may his name be triply cursed), adoptive son of Baron van Heeckeren, the Dutch ambassador to the Tsar’s court.

The strange title sums up the degree of detail Vitale is willing to go in describing the last months, weeks, days and even hours of Pushkin’s life.
The button, contemporaries remembered, was missing at the back of the writer’s Kamerjunker uniform. Why should this be important? Well for several reasons. The fact that we know that the button was missing, a detail recorded in letters from those days, shows how public a figure Pushkin was, how every mood, dress, word of him was registered, analyzed, discussed by the bored Aristocrats of Saint Petersburg who had nothing else to do then to fill their days with gossip and parties. Some said that the button was missing because Pushkin’s beautiful wife Natalya, instead of looking after her husband preferred to flirt with the despicable Baron Georges d’Anthès (may his name be triply cursed) instead of mending her husband clothes. Others said that it was Pushkin himself who refused to let his coat be repaired because he hated the compulsory dress code and that it was the last sign of resistance he could still show, a symbolic gesture that he did not care about the petty rules, which were forced upon him by Tsar Nicholas and his administration.

Serena Vitale is a professor of Russian language and literature at the .
She got access to the archives of the de Heeckeren family, where she found the correspondence between the old Baron and his adoptive son. Many mysteries still surround the characters and the happenings of that dreadful 27th January and she hoped to find some elucidations in these new sources. One question that remains for instance is the understanding of the relationship between the Baron de Heeckeren and d’Anthès- (may his name be triply cursed). Another question is: was the Tsar involved in the manupulations surrounding Pushkin’s death in order to get to the beautiful Natalya. But most important of all, who wrote the nine anonymous insulting letters to Pushkin, the ones who branded him as a cuckold and which triggered the whole disastrous affair?

Vitale analyzes not only the de Heeckeren correspondence but also the mass of letters, private journals and diaries mentioning Pushkin’s struggle.

Half way in her book the professor explains what she is doing: “In recounting this story, I am far from being an omniscient narrator, and closer to being a patient conservator poring over a mosaic with too many missing tiles, sifting through the few remaining fragments – a handful of letters, brief passages in memoirs, the laconic and often enigmatic notes jotted down by Zhukovsky shortly after the event- in an effort to reconstruct the shape and shading of a picture long faded by time. One is guided by logic and an intimate familiarity with the protagonists hard – earned by long research. Yet doubt often assails one, as it must anyone laboring in good faith”.

I found it surprising how much of that correspondence still exists.
The story, Vitale brings us hangs somewhere between an Academic dissertation and a literary detective story. Unfortunately, for one reason or another, Vitale’s work, as you can see in the quote, is not a fluent read. It is not clear if it is due to the translation or because Vitale remains too much the academic and not enough the storyteller.

It is a pity, for the story, while after all nothing more than a sordid “fait-divers”, “une histoire de cul et de cocu”, with the colorful protagonists, the mysterious intrigue, the dark court manipulations and the many unexplained happenings, make it, if not a gripping page turner, still a fascinating story.

A letter of a woman living in , sums up how “l’affaire Pushkin” was perceived in the days before the duel: “It’s a mystery of love, of heroic devotion, it’s Jules Janin, it’s Balzac, it’s Victor Hugo. It’s literature of our time. It’s sublime, it’s ridiculous. A sneering husband (Pushkin) publicly gnashing his teeth. A pale and lovely wife destroying herself with dancing, that lasts entire evenings”.

Poor beautiful Natalya, she was fair game for that magical Mazurka dancer d’ Anthès (may his name be triply cursed). Nor he, nor his adoptive father realized the danger there was to make court to the writer’s wife. They did not care that he became the laughing stock of the high society. With their shameful doings, they pushed Pushkin against the wall. Everybody saw it happening, everybody enjoyed the juicy gossip, and nobody intervened when it was still possible. Only when it was too late, did people realize the extent of the drama.

picture of the room and Pushkin's deathbed 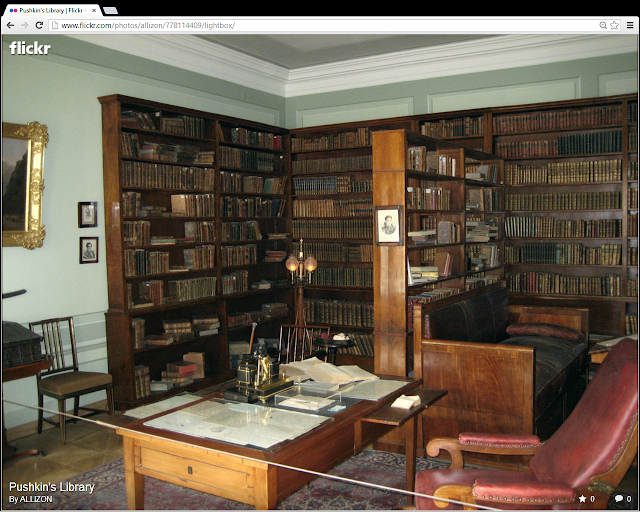