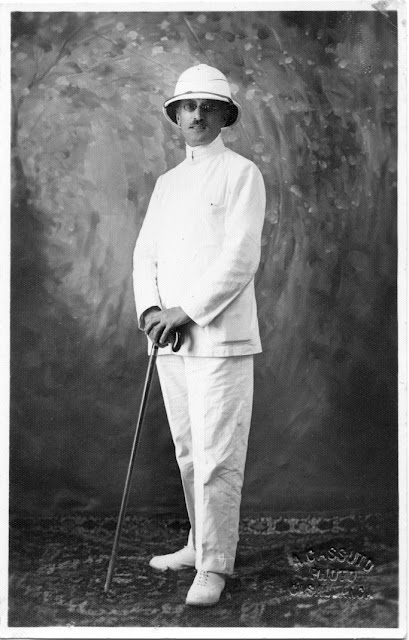 Some years ago, when I was still collecting sea yarns and sea narratives, I regularly visited Henriette Luyckx's second – hand bookshop “La bouteille à ancre" in the of , that strange sympathetic booklover’s village hidden in the .


Searching through a pile of books, I was suddenly attracted by three paperback volumes written or rather edited by a certain Americo Bertùccioli. The three books, “La grande Bleue” (1941), “Les origines du roman maritime Français”( 1937 ) and  “La Mer” ( 1937 ), were in fact compilations, anthologies of French nautical literature, schoolbooks for students at the in .

Bertùccioli, professor at the ,  had at a time, probably during the first world war, been aboard of the school – ship "Americo Vespucci”.

"La Mer" and "la grande Bleue" were introduced by the French author, member of  the “Academie Française", Charles le Goffic.

I could not find out how the books had found their way to “La bouteille à ancre", but I purchased all three and took them home.

A handwritten inscription on the title page, gave some information to whom at least two ( La Mer, La grande Bleue ) of the three books had once belonged: a certain Mr. Dewèvre. Under his name, written in pencil, there was also written “, Nov 1946”, probably the place and date of purchase.

Inside the books, I found three letters written by the author Americo Bertùccioli and addressed to the Mr. Dewèvre. The latter one  must have been a seafaring officer for the oldest letter was addressed to him on board of the Belgian ship, the “Prince de Liège” which was docked in .

In the first short letter, dated 17 March 1947,Bertùccioli apologized for having missed the departure of the “Prince de Liège”. Probably he wanted to give some books to Dewèvre to pass to his sister Genevieve who was a student in languages. He promised to send “Les origines du roman maritime Français” by post. He obviously kept his promise because it was the third book I had in my possession. He kindly finished the letter mentioning the pleasure their meeting had given him and he hoped they would meet again somewhere soon.

In the second letter, dated 11 December 1947, Bertùccioli replies to a letter he received on the 6th of November. He mentions a trip to , where he met old friends. He has also received a letter from Dewèvre’s mother who seems to have invited him to their home in the Belgian city of . Dewèvre sister has asked information about a certain Mariotti but the professor had not found anything.

A third letter is dated 25 April 1948. Bertùccioli replies to a letter of 18 March. First he speaks about some books he has found in and then the letter takes a sadder tone. Bertùccioli complains that all his files (on nautical literature) have been destroyed during the war and that he now lacks the courage to try to build them up again. He would like to meet Dewèvre again, in Livorno or so and he ends with mentioning that his only project for the moment is his summer holiday which he is going to spend with his nephews in .

I read these letters with amused curiosity and folded them back carefully and slipped them back between the pages of the books.

I tried to piece together the history. The older professor Americo Bertùccioli and the young Belgian Officer meeting in Livorno probably, in an recovering from the disaster of the Second World War. Their meeting must have been most satisfying for both of them, for they kept corresponding for at least two more years.

After reading the books, they found a place in my library and I forgot about it.

One year ago, in a discussion on LibraryThing, titled “things you find in books”, I briefly alluded to these letters and mentioned the name of Bertùccioli. Some weeks later I was surprised to find a post trough LibraryThing from a certain Miss Bertùccioli.

Searching the web for Americo Bertùccioli, she had stumbled on my post. She asked a copy of the letters and offered me a picture of the professor. It appeared that Miss Bertùccioli was Americo’s niece.
She was so kind to send me an autograph written by Americo, and I could ascertain myself that we were indeed speaking about the same person.

Miss Bertùccioli seemed to be the last person remaining of Americo's family. Americo was born in and brother of her great grandfather. He died when she was 3 years old, so she didn’t have any direct memory about him, but her father was in really good relation with him (Americo had no children). He used to live in Livorno teaching in the but he often came to , where his family was, to spend time especially in summer. This confirms what he wrote in his last letter to Dewèvre.

Miss Bertùccioli in her kind mails to me called Americo eclectic. Her mother told her he was a real dongiovanni but he never got married although he really liked women. She told me that the professor used to travel a lot and that she had lots of letters he received from distinguished people. And there was even a curious anecdote about him: he died twice because once he was declared dead for a long time (a couple of hours) but after that he was living another ten years or so...

Books do open the world. Sometimes they even bring people together.


(With my thanks to Miss Bertùccioli)