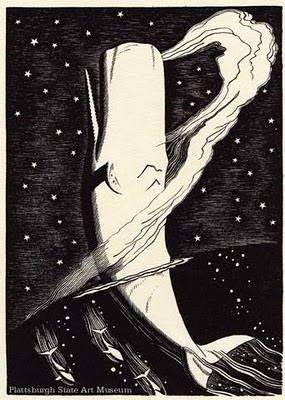 I have chosen for my 2011 Folio society membership  the limited edition of Moby Dick written by Herman Melville and illustrated by Rockwell Kent.

Approached in 1926 by publisher R. R. Donnelley to produce an illustrated edition of Richard Henry Dana, Jr.'s Two Years Before the Mast, Kent suggested Moby-Dick instead. Published in 1930 by the Lakeside Press of Chicago, the limited edition filled with 's haunting black-and-white pen/brush and ink drawings sold out immediately; Random House produced a trade edition which was also immensely popular. A previously obscure book, Moby Dick had been rediscovered by critics in the early 1920s. The success of the Rockwell Kent illustrated edition was a factor in its becoming recognized as the classic it is today.