The Soccer War by Ryszard Kapuscinski 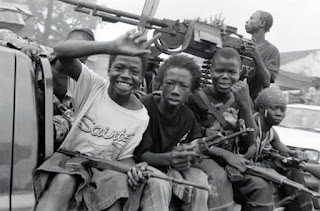 Kapuscinski’s second book, “The Soccer War” (Wojna futbolowa), written in 1978 is not the Polish writer’s best book but it certainly fulfills the expectations.

Again Kapuscinski, who as a war - correspondent visits the different third world countries during their bloody struggle towards independence, finds himself in the most dangerous situations. Ryszard is stung by scorpions, dodges bullets, escapes fire squads, hides from enraged lynching mobs and, even in a moment of extreme horror, is doused in petrol, ready to set alight.

The revolutionary theatres he is visiting follow each other: Congo, Algeria, Mozambique, Ethiopia and Somalia. The book takes it enigmatic title from one of these “revolutions”, the 100-hour war between El Salvador and Honduras in ’69. Ignited by the riots following the qualifying rounds of the 1970 World Cup, this Central - American hysteria leads to some 300,000 Salvadorans displaced from their homes, 900 troops and civilians killed on El Salvadorian side, 2,000 civilians killed on the Honduras side and thousands of homeless farmers, who have not a clue of what happened to them.

All this in less than four days of fighting!

Kapuscinski’s reputation as a hard boiled war-correspondent and witness of his time has slightly been debunked by a recent biography written by his fellow countryman Artur Domoslawski. Kapuscinski seems not to have been the witness to all of what he claimed. Still Kapuscinski enjoys a quasi mythical status in Poland and the new biography was viciously attacked when published.

So what to think about this book? Personally, I think that none of Kapuscinski’s earlier books can beat the universal and time-less attraction of his last novel “Travels with Herodotus”. All his previous books, original and gripping reads on their own account, still lead to his final book which is also his testament.

Apart from some sensational incidents, Kapuscinski’s books have dated a bit. The great events he describes have turned into historical footnotes; most mysteries he discusses have been elucidated or at least been put into another perspective.
But some chapters are essential in their depiction of what is wrong with the countries he loved so much.

Take for instance the short chapter in which Kapuscinski narrates how a Tanzanian woman, Member of Parliament, tries unsuccessfully to pass a bill which would greatly improve the financial support and the living conditions of the numerous illegitimate children by passing a part of the responsibility to their known biological fathers.

The ludicrous arguments, which her male colleagues use against this praise-worthy bill, announce, already then, the scandalous attitudes and blatant irresponsibility which many African governments will show towards the Aids problem and explains why the different African Leaders failed to set up an effective prevention program.

So, as a conclusion, any book of Kapuscinski is still a gripping read, but as to the understanding you get out of it depends on your proper insight and your receptivity.