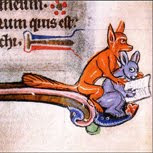 We don’t exactly know who wrote the story of Reynard the Fox nearly eight hundred years ago, nor do we know the audience the writer had in mind, but listen to the following excerpt and agree with me that its attraction is timeless and its caustic wit universal. …

“Reynard the Fox has been accused by his fellow animals of rape, violence and theft.
Tibert the Cat, as a Royal emissary, visits Reynard in his castle to summon him to Court. Tibert is careful, because the previous messenger, the Bear has returned badly maimed from a first encounter with the Fox.

Reynard greets Tibert as a friend and listens carefully to the accusation. In the evening, prior to leave for the Court, he proposes to the Cat to steal together a few chickens from the house of the Parish Priest. Tibert has no objection to this, and follows the Fox until they arrive at a hole in the wall of the chicken run. “Be my guest”, says Reynard and points to the hole. Tibert hesitates an instant but as Reynard challenges him with “you’re not afraid, are you?”, the cat puts its head trough the hole and right into the noose the Priest has prepared for the chicken thief.

In the commotion, the suffocating cat makes such a fuss, that the Catholic Priest, his wife and his children, come running out of the house. The Priest, straight out of bed, in his joyful haste to catch the thief, is still naked. He and his kin start beating the cat with sticks and stones until the poor animal, who cannot free itself, looses an eye.

In a last reflex, the nearly dead cat, hooks its claws into the Priest testicles and rips the pouch open. While the Priest’s wife tries to help her howling husband, the cat gnaws trough the noose and escapes back to the King’s castle, eyeless, limbs broken, barely alive.

The sniggering Fox fades back in the dark”.


This short satiric piece contains all medieval issues man enjoyed to denounce: (Aristocratic) thieves accusing fellow thieves, debauched Priest telling others how to live their life and the powerful always taking advantage of the weak. Typically, Reynard stories' usual butts are the aristocracy and the clergy.

The whole Reynard cycle is a satirical classic.

Reynard, the well known anthropomorphic red Fox, an iconic character in medieval literature, has been summoned to the court of King Noble, the Lion, to answer charges brought against him by Isengrim the Wolf. Only after a third emissary is dispatched, the fox agrees to join the Badger to see the King and to defend his cause before the Court. But in his clever and cunning way Reynard fools both King and Queen, takes sadistic revenge on his enemies and escapes with wife and children before the credulous crowds realizes, how the sly Fox took advantage of their stupidity, their cupidity and their gluttony

Most of us have grown up with some knowledge about the sly fox’s adventures. Probably you know the children’s version where Reynard is depicted as a young mischievous fox, a sympathetic rascal. But the real Reynard story is not suitable at all for children. Indeed, Disney had years ago attempted to make a movie based on Reynard, but the project was eventually cancelled, due to concerns that he was not suitable as a hero.

Few, with the exception of some academics, have ever been told the original story of Reynard and how it should be understood in the context of the 13th century in which it first appeared.

Based on the Middle Dutch version of the story (Van den vos Reynaerde) written around 1260 by the elusive “Willem, die Madoc maecte” (Willem who has made Madoc) , the graphic novel Reynard newly translated by René Broens and illustrated by Marc Legendre is setting the record straight.

First, the author brings a new translation of the classical text, in modern Dutch, more comprehensible, but in its essence much closer to the 13th – century original. The text has been cleared of the euphemisms and political correctness. The author also restores the rhymed verses (the AA BB scheme) which seem to have been lost in the many updatings and modernizations, but which brings a haunting rhythm to the narration.

Secondly, there is a surprising scabrous element included in the illustrations. A Church candle looks like a phallus. The sausage Reynard steals from the Cat looks like a penis. The religious education Reynard gives to Couaert the rabbit looks like a brutal rape. Medieval illustrations invariably show Reynard taking the rabbit from behind while whispering the credo in his long ears. (Uncannily actual if one considers the recent Church scandals). Homosexual fantasies with dog - headed men slip trough the lines. Women have names alluding to loose morals. Priests are married and have children with different women, etc etc. But these desecrations are as much part of medieval lore as are superstition and cruelty.

Finally the author presents the Reynard of the 13th-century as an anti- Christ, an unholy man, the opposite of a man of Christ. Reynard lives as a Hermit in his castle, speaks like a priest, travels like a pilgrim, but acts consistently opposite as to what is expected from him as a religious man and the seven Corporal and Spiritual Works of Mercy.

Master illustrator Marc Legendre paints all this in a very raw, dark, lugubrious and scabrous style. The pages are dabbed in black and blood red. Legendre gathers his inspiration from the religious iconic paintings of Christianity. Brown the Bear’s badly mutilated face, is drawn like the Christ of Fra Angelico, his face covered with blood under a crown of thorns. Reynard with the noose round his neck is the “Ecce Homo” painted by Andrea Mantegna. The fox between his prisoners comes straight out of a masterpiece by Hieronymus Bosch. In clever compositions made of drawings, photo-shopped pictures and artistic patchwork, Legendre creates fascinating “tableaux” as beautiful as they are shocking.

The result is unsettling to say the least.

The Artist who gave us the Reynard had not a high opinion of “Man”. With their dark rendering of the true meaning of the Reynard legend, Legendre and Broens viciously hammer down this impression even deeper.