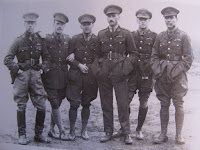 Going trough the shortlists of the Booker prizewinners of earlier years, my eye fell on Derek Robinson's book "Goshawk Squadron". This slim novel, shortlisted for the booker 71, is one of my Dad's favourites and when we read it for the first time way back in the early eighties, we discussed its content and its raw philosophy at length. I saw that it was missing from my library so I ordered it from Amazon. (Dad has two pocket editions, one French, one English but obviously didn't want to part from them)

Great read indeed! After an unfinished struggle with two Booker winners (Oscar & Lucinda and Wolf Hall) this thin book came as a whiff of fresh air. No, that is not correct. It came like a howling rush of petrol- smelling ice-cold air, lethally stunning to pilots and readers alike.

Goshawk Squadron, Derek Robinson first novel, tells the misfortunes of a handful of pilots fighting off the Germans in the airspace over the trenches in France and Flanders.

In a horrible “carousel of death”, young inexperienced new pilots arrive at Goshawk Squadron, often with less than 10 hours of flight experience, and are immediately sacrificed up in the air where they are no match for more experienced German pilots. Often they don’t even make it to the fighting, crashing their wood and canvas planes in stupid flight accidents.

Major Stanley Wooley is the commanding officer of this fictional fighter squadron. He is in his early twenties but has survived 4 years of constant dogfights in his SE5A double deck plane. This makes him the most experienced guy around.
Wooley, in a futile attempt to keep his recruits alive, cuts corners in their education. Forget Chivalry. Go up in the air, hide in the clouds or glare of the sun and try to shoot the Germans in the back and flee while you can. Don’t waste ammo on the plane, shoot the enemy pilots, even if they are saving themselves in parachutes. All shocking to the new pilots who have joined the ranks with ideas of man to man combat, chivalry and other bygone notions.

The 12 chapters of the book are appropriately numbered and named according to meteorological gale force measurements. The intensity of combat, build gradually until the end of the book.

There is a post-modern ring to the depiction of Wooley as an “archangel of death” or as the “pedagogue-assassin”. It makes the figure a bit anachronistic. You would more easily expect such a figure in a Vietnam –war, Apocalypse now, psychedelic and hallucinating environment. In a hastily written defensive postscript, Derek Robinson reassures the worried readers that he has found his inspiration for the excesses depicted in Goshawk Squadron from genuine pilot journals and interviews.

Still one hell of a read.