The Counterfeiters by Andre Gide 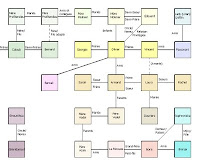 The French writer André Gide ( 1869 - 1951), is a far more interesting personage than any character in his books.
And he knows it. His book “the counterfeiters” (French: Les faux-monnayeurs) written in 1925 copies the fictional journal of his fictional alter ego Edouard who is trying to write a book with the same title “ the counterfeiters”. Edouard does not succeed but Gide did and was awarded both with a Nobel Prize for litterature ( 1947 ) and with a dishonorable mention on the Roman catholic Church index of forbidden books ( 1952 ).

Gide's book is about adolescent young men, emerging out of the golden cage of their protected childhood, with its straight-laced education and narrow moralistic puritan constraints, trying to become fully and honestly themselves (ambition, aspirations, values, sexual nature etc ).

The very complex structure of the counterfeiters, with many characters developments crisscrossing each other, succeeds in creating the same confusion within the reader as the one the young characters experience in the book. One really needs a social network graph to understand and remember how the most important characters in The Counterfeiters are related to each other.

The main theme of the novel is that of the original and the copy, and what differentiates them – both in the external plot of the counterfeited gold coins and in the portrayal of the characters' feelings and their relationships.

Furthermore, The Counterfeiters is a novel-within-a-novel and the “mise en abime” technique recreates this sense of vertigo to the pages of this roman.
Gide uses other stylistic devices, such as an omniscient narrator that sometimes surprises the reader by adressing him directly. He does this with technical brio !

A lot of human relations are condemned as “faux”, or false in the book. Behind the façades of the Parisian bourgeois mansions, a hidden world unfolds. Damaged Father – son relations, unwanted pregnancies, repressed homosexual or bisexual love, paedophilic attraction, adulterers, bastard children, cruelty, general unhappiness and thanatos.
Incidently, it looks like a shortlist of Gide’s own issues. He too was trying to cope with his sexual nature within his “modern marriage” in a world from which he could expect neither understanding nor sympathy.
André Gide born in Paris, son of a professor of law at the University of Paris,
was raised by his Calvinist mother. He was mostly educated at home and was a lonely child. Although Gide had “discovered” his homosexuality during his African voyage in 1893, he still did marry his childhood friend Madeleine Rondeaux in 1894. In 1916 Gide eloped to London with his 16 year old lover Marc Alegret, son of his friend Elie Allegret. No one was amused and Madeleine burned the lovers correspondance as retribution.
Still in 1923, Gide, the married homosexual, conceived a daughter with Elisabeth van Rysselberghe, a much younger woman, daughter of his friend, the Belgian neo-impressionist painter Théo van Rysselberghe.

Enough gossiping, back to the “ Counterfeiters”

Gide aims to expose the hypocrisy and self-deception with which people try to avoid sincerity. The protagonist, Edouard, keeps a journal of events in order to write a novel about the nature of reality. Another internal author - the 'pseudo-author', an intervening first person voice - comments the action. Edouard falls in love with his nephew Oliver Molinier. Through their story Gide illustrates what he considered a constructive homosexual relationship. Numerous themes are woven into the complex structure, not only the novelist writing a novel about a novelist who is writing a novel about forging. The intrigues of a gang of counterfeiters symbolize the counterfeit personalities with which people disguise themselves.

Initially received coldly on its appearance, perhaps because of its homosexual themes and its unusual composition, The Counterfeiters has gained reputation in the intervening years and is now generally counted among the Western Canon of literature. Gide has influenced a whole generation of young writers, including the existentialists Albert Camus and Jean-Paul Sartre.
The making of the novel, with letters, newspaper clippings and other supporting material, was documented by Gide in his 1926 Journal of The Counterfeiters.