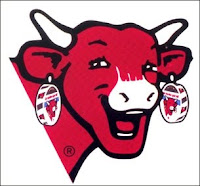 Mise en abyme (also mise en abîme) has several meanings in the realm of the creative arts and literary theory. The term is originally from the French and means, "placing into infinity" or "placing into the abyss". The commonplace usage of this phrase is describing the visual experience of standing between two mirrors, seeing an infinite reproduction of one's image.
Mise-en-abîme occurs within a text when there is a reduplication of images or concepts referring to the textual whole. Mise-en-abîme is a play of signifiers within a text, of sub-texts mirroring each other. This mirroring can get to the point where meaning can be rendered unstable and in this respect can be seen as part of the process of deconstruction. The film-within-a-film is an example of mise-en-abîme. The film being made within the film refers through its mise-en-scène to the ‘real’ film being made. The spectator sees film equipment, stars getting ready for the take, crew sorting out the various directorial needs. The narrative of the film within the film may directly reflect the one in the ‘real’ film.
In Western art "mise en abyme" is a formal technique in which an image contains a smaller copy of itself, the sequence appearing to recur infinitely. The term originated in heraldry, describing a coat of arms that appears as a smaller shield in the center of a larger one. See Droste effect.
In film, the meaning of "mise en abyme" is similar to the artistic definition, but also includes the idea of a "dream within a dream". For example, a character awakens from a dream and later discovers that he or she is still dreaming. Activities similar to dreaming, such as unconsciousness and virtual reality, are also described as "mise en abyme". This is seen in the film eXistenZ where the two protagonists never truly know whether or not they are out of the game.
In literary criticism, "mise en abyme" is a type of frame story, in which the main narrative can be used to encapsulate some aspect of the framing story. The term is used in deconstruction and deconstructive literary criticism as a paradigm of the intertextual nature of language—that is, of the way language never quite reaches the foundation of reality because it refers in a frame-within-a-frame way to other language, which refers to other language, et cetera.
The ability of computers to so repeat a task has led to modern forms of this technique: screen savers that fly through space forever, looping and churning tunnels.