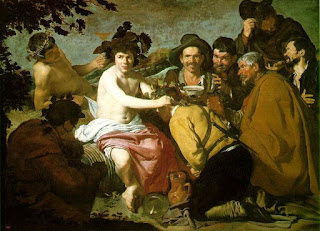 The Apollonian and Dionysian is a philosophical and literary concept, or dichotomy, based on certain features of ancient Greek mythology. Several Western philosophical and literary figures have invoked this dichotomy in critical and creative works, including Plutarch, Friedrich Nietzsche, Carl Jung, Robert A. Heinlein[1], Ruth Benedict, Thomas Mann, Hermann Hesse. In Greek mythology, Apollo and Dionysus are both sons of Zeus. Apollo is the god of the Sun, lightness, music, and poetry, while Dionysus is the god of wine, ecstasy, and intoxication. In the modern literary usage of the concept, the contrast between Apollo and Dionysus symbolizes principles of wholeness versus individualism, light versus darkness, or civilization versus primal nature. The ancient Greeks did not consider the two gods as opposites or rivals. However, Parnassus, the mythical home of poetry and all art, was strongly associated with each of the two gods in separate legends.

Nietzsche's aesthetic usage of the concepts, which was later developed philosophically, was first developed in his book The Birth of Tragedy, which he published in 1872. His major premise here was that the fusion of Dionysian and Apollonian "Kunsttrieben" ("artistic impulses") forms dramatic arts, or tragedies. He goes on to argue that that has not been achieved since the ancient Greek tragedians.

Dionysus (Dionysian): chaos, intoxication, celebration of nature, instinctual, intuitive, pertaining to the sensation of pleasure or pain, individuality dissolved and hence destroyed, wholeness of existence, orgiastic passion, dissolution of all boundaries, excess, human being(s) as the work and glorification of art, destruction, the irrational and non-logical.The relationship between the Apollonian and Dionysian juxtapositions is apparent, Nietzsche claimed in The Birth of Tragedy, in the interplay of Greek Tragedy: the tragic hero of the drama, the main protagonist, struggles to make order (in the Apollonian sense) of his unjust and chaotic (Dionysian) Fate, though he dies unfulfilled in the end. For the audience of such a drama, Nietzsche claimed, this tragedy allows us to sense an underlying essence, what he called the "Primordial Unity", which revives our Dionysian nature - which is almost indescribably pleasurable