The Master and Margarita : An exercise in interpretation 2 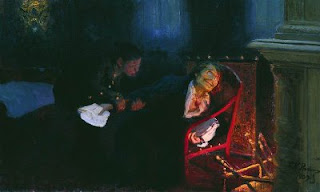 This painting by Ilja Yefimovitsch Repin, (1909, oil on canvas 81 × 134.5 cm) displayed at the State Tretyakov Gallery in Moscow does not represent “Gogol burning the manuscript of the second part of "Dead Souls". It represents Mikhail Bulgakov burning the first version of “the Master and Margarita”.

Why should we think so?

If we may believe Nabokov, the burning of the second part of “the death souls” was a positive moment seen from an artistic point of view. It was the result of Gogol’s final insight of what he was doing and what artist he had become. Neither satisfied him and true to himself, he committed his writings to the flames.

Bulgakov however burnt his manuscript simply because he was terrified. The mere knowledge of the existence of his book by the Communist authorities would have sentenced the author to death. Probably he expected Stalin’s security people to find him out in the coming hours and therefore he burned the pages of his work, to safe his life. The man in Repin’s picture is devastated. All the lost work, all the lost time…

Both Gogol and Bulgakov did fear the Devil. Few however can boast having him on the telephone as happened to Bulgakov on 17 April 1930.
Reacting to a letter Bulgakov wrote to the central Government complaining that the hostility of the literary establishment made it impossible for him to work, Stalin himself called the author and helped him obtain a position with the Moscow Art Theater.

But things did not improve. Only two of Bulgakov’s stage adaptations were granted a normal run. His own plays were not staged or were quickly withdrawn.

Obviously Bulgakov had some scores to settle.

The intrusion of Satan and his gang in the program of the Variety theatre and the taking over of the apartment at Sadovaya 50, allows the author to do just that: settle some private scores and ventilate his critique on matters that must have irritated and humiliated him constantly.

Let’s take them in turn.

The literary establishment, represented by Massolit chairman Berlioz is dealt with in the very first pages of the book. His beheading frees also half of the apartment at Sadovaya. The HQ of the Russian writers is described as nothing more than a posh restaurant and a place to receive some VIP treatment. The poet Ivan the Homeless, a thinly veiled caricature of Efim Pridvorov is send of to the psychiatric ward. This is after all standard procedure in Communist Russia for the unruly.

Next step is to send the other tenant of Sadovaya 50, Styopa “Stepan” Bogdanovich Likhodeev to Yalta. Exile and disappearing people in Russia? Not uncommon either.
The apartment is now ready for Woland and his retinue.

No disappearance without correct administration and so the devil’s settles matters with the housemaster Nikanor Ivanovich Bosoy.
Boulgakov suffered crookedness of these tenants when looking for an apartment in the twenties and thirties
Again the usual Communist procedures: Bosoy is accused and arrested for accepting bribes and dealing in foreign money.

Finally the Master of ceremony George Bengalsky, in a scene echoing the earlier beheading of Berlioz, is assaulted by Behemoth, the giant cat, who just tears of his head, splattering blood all over the scene of the Variety Theater.

Bulgakov humiliation is finally washed away in blood.