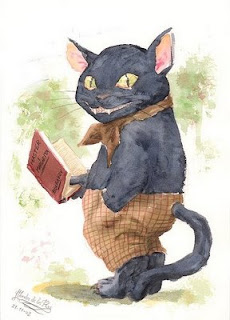 The Master and Margarita by Mikhail Bulgakov.

( second reading )
“Never speak to strangers,” warns the first chapter of this wonderful book, but that is exactly what Mikhail Alexandrovich Berlioz, chairman of the Union of writers in Moscow, so carelessly does. The stranger happens to be Satan himself and when Berlioz boldly claims that Christ does not exist, the Devil with a cruel act, ironically not only proofs his existence but that of the anti-Christ as well. This then is the start of a wild chase through the Stalinist Moscow of the nineteen thirties and the beginning of one of the strangest stories which managed to get printed under the Soviet Totalitarian regime.

Written between 1930 and 1940, when Stalinist terror was at it worst, the content of the novel “The Master and Margarita” literally was life threatening to its author Michael Bulgakov. It is very likely that Bulgakov would not have survived their reprisals if the Soviet authorities would have discovered his manuscript. The author was very well aware of this and did indeed destroy a first version of his masterpiece out of precaution.

It is difficult to imagine what live must have been for an intelligent sensitive artist under Stalinist totalitarian regime. It would be something like Salman Rushdie writing the Satanic verses while living in Kabul!

If fighting back in the open was suicidal, how could you mentally survive such a situation? In the “Master in Margarita”, the narrative of Jesus condemnation offers already one option: to offer one‘s cheek and mumble with the crucified: “forgive them for they do not know what they are doing”.

Bulgakov however finds in M& M a third and safe way to ventilate his anger and frustration and he does so in a very entertaining way: he gets back at his tormentors by retaliating through his artistic creations. He sides with the Devil and his retinue and unleashes his destructive anger on his enemies.

Imagine for example that the blasphemous first chapter of M&M was indeed triggered by the iconoclastic poetry of the militant atheist Demyan Bedny.
Through his writing, the highly offended Bulgakov could get back at him through the viciously beheading scene of Berlioz. “You don’t believe in God?” “Whack there goes your stupid head!”

Again, a bit further in the book when Ivan Bezdomniy,Berlioz companion of the first chapter tries to explain what happened to the unbelieving Director of the psychiatric ward Bulgakov strikes again : “Tell your version of the truth and finish locked up as the schizophrenic moron you really are”.

One cannot but smile in sympathy with Bulgakov and applaud the humour he extracts from the terrifying environment of his daily life. Writing these scenes in the precarious safety of his flat must have been a therapeutic reaction to the author’s accumulated anger.

As we further pursue the Devil and his gang, we are introduced full speed to numerous situations, different locations and dozens of people.However, the moment we are introduced to them, most of the characters fall victim to the devil’s terrifying magic. People mysteriously disappear, they accidentally die, they are exiled to other cities, and they are imprisoned or locked up in an asylum. Everybody is guilty of something and is found out: Black market, foreign currencies exchange, briberies, etc.
The results of Satan’s acts mirror the consequences of indiscretions and carelessness in this Stalin era Moscow, where normality is imposed terror.
Together with the Muscovites, we are asking ourselves: "What is happening?"It seems that the Devil has arrived in Moscow and settled in an apartment on Sadavoya Street in the centre of the city. Again Bulgakov and his Devil punish the inhabitants of the apartment in the same way as what the Soviets did to the previous proprietors. Where are the original inhabitants of Saravoya 50 ? Obliterated? Forgotten? We don’t even remember their names after they are taken away by the secret police.

The Devil and his gang of cronies are settling scores with the custodians of the official literature in order to take over the presentation at the Variety Theatre.
The grand show of magic and grotesque carnival offered to the Moscovian public causes such havoc and mayhem that it unsettles Artistic Moscow to its deepest roots.

Once more Bulgakov exposes his revenge. He rips apart the entire Variety theatre top, these sycophantic puppets of the regime and makes fun of their audience. Bulgakov let’s his Satanic characters tear heads from bodies, hurl them to Yalta, chase them naked trough the streets of Moscow to uncover their greed and their evil stupidity.

But there is more. Satan has chosen Moscow as the location for his yearly Spring ball, the Gothic Society happening of the Underworld. Everything is ready although one key invitee is missing… a hostess to welcome the demonic guests. Beautiful (and married) Margarita has fallen in love with a writer who is called “the Master”. They have occasional secret rendezvous in the basement apartment of the artist. The Master is writing a story about Pontius Pilate. While Margarita is reconsidering her marriage and dreaming of a life with her artist lover, the Master like Bulgakov is pondering over the dangerous content of his work.One day the lover disappears and without Margarita knowing it, is locked up in the asylum. As we end the first part of the book, poor lonely Margarita caught in her marriage has to suffer in silence.The second part of Bulgakov’s starts with bringing beautiful Margarita and the Devil together. When the Devil offers her a way out of her unhappy romantic condition, she grabs this opportunity and this classy lady, in a flash, turns into a naked fury riding her broomstick over Moscow and out of pure anger, frustration and revenge destroys a complete building. This act, which again mirrors Bulgakov’s contained rage, Margarita’s wild ride trough the Russian night sky and her subsequent hosting of Satan’s spring ball, allows Bulgakov to paint the most superbly entertaining and spectacular theatrical scenes.
The Devil finds in Margarita an elegant hostess to his party. To reward her for her excellent performance at the grand Demonic Spring ball, the Devil reunites Margarita with her lover.The Master and Margarita is a great and entertaining book. The pace of narration is fast and the characters and settings are numerous. Fortunately the book is chopped in thirty or so short chapters as if the author wanted us to be able to catch our breath in this whirlwind of Russian literature.
But most of all we are reminded that M&M kept Bulgakov alive during these terrible years and offer us a beautiful insight in his silent resistance.
http://www.klassika.ru/read.html?proza/bulgakov/master97_engl.txthttp://lib.ru/BULGAKOW/master97_engl.txt_Piece40.01