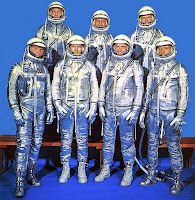 19 - 22 March 2009: The Right Stuff by Thomas Wolfe
The 1983 motion picture “Right Stuff” is one of my all-time favorites. The movie recounts with a lot of humor and insight, the personal stories of the first Astronauts and their wives during the epic of the American Mercury Space Program.
Wolfe is looking for the answer to the question: “What makes a man brave or crazy enough to be hurled into Space on top of a huge rocket?”
The answer: To have the “Right Stuff”, an out of this world, macho Coolness.
I saw the movie several times and even learned a lot of its splendid “one – liners” by heart at the time.
I knew that it was an adaptation of Tom Wolfe’s 1979 book but I never came to read it. I did however read the biography of Chuck Yeager, the test pilot who first crossed the sound barrier and who played a major role in the movie. It was an interesting read but not more than that either.

Only when “The Right Stuff” appeared as a novelty in the 2009 Folio Society’s catalogue did I finally acquire and read it.

The Right Stuff is the story of the pilots engaged in U.S. Mercury program.
In the first chapters, Wolfe introduces us to the personal stories of the test pilots. We are following their very risky lives as well as the psychological strain it brings to their wives.
Wolfe has extensively researched his subject by interviewing the pilots and their families and it shows in his descriptions what the “right stuff” of man and wife are made of. The introduction of these modern heroes culminates in Chuck Yeager’s successful attempt to break the sound-barrier.

We then switch to the selection process of the pilots for America’s first Space Program Mercury. Wolfe contrasts the selected “Mercury Seven” with the Edwards base test pilots, among which was Chuck Yeager.

Yeager and other top pilots seem to have been shut out of the astronaut program after it was decided to only select college-degreed pilots. We can suspect their disappointment even though astronauts are installed on top of the rockets for mere promotional reasons. The first crewmembers would not actually fly the spacecraft and the chimpanzee specimen preceded the human spacemen!

In the last part, we follow the first space successes. Shepard goes first for just a peep in space and comes down a hero with ticket tape parade, White House visit and all that. After that it is the turn of Grissom. The capsule is lost at sea when he exists prematurely. No hero welcome for him! Third up and first orbital flight is John Glenn and again we go trough the whole Hero – Media circus. The next astronauts are…, what is their name again? As the media attention is drawn to the Vietnam war and the next - even better- Apollo moon program, the heroes receive less and less attention.
Having the right stuff is no longer news.

The Right stuff is a pleasure to read. It is interesting, witty and intelligent and at some moments hilarious. A sure recommendation.

Tom Wolfe ( born March 2, 1931), best-selling American author and journalist is one of the founders of the New Journalism movement of the 1960s and 1970s in which some journalists and essayists experimented with a variety of Literary techniques, mixing them with the traditional ideal of dispassionate, even-handed reporting. Wolfe is a conspicuous appearance in his Southern gentleman white suit, his white homburg hat, and two-tone shoes.